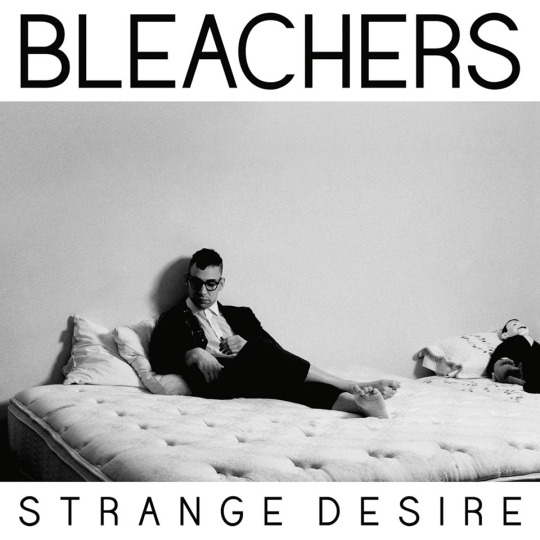 Jack Antonoff came to fame with his Grammy-winning band, fun., but if you want to get an idea of what his new band Bleachers’ album Strange Desire sounds like, then Taylor Swift’s 1989, for which Antonoff co-wrote “Out of the Woods” and “I Wish You Would,” is a better starting point.

Like 1989, Strange Desire is full of anthemic pop songs, almost all of which you can dance to, and has an 80’s production style that is shiny, clean, and uncluttered that allows each individual instrument to be heard clearly. Both albums’ songwriting is sharp and clever with instantly memorable choruses, and the lyrics are personal enough to be parsed by diehard fans and universal enough to be sung along with mindlessly when heard on the radio. That’s pretty close to the platonic ideal of pop music. But while Strange Desire is made in 1989’s mould, it moves the aesthetic two clicks over toward rock and the more personal.

Strange Desire is universally melodic and well-produced. The dominant instrument is the synthesizer, but it is used in more of a new wave than Madonna-style and there are also guitar solos. It’s an album steeped in 80’s pop rock, maybe the last time that rock bands could make unabashedly catchy, mainstream music and be big stars. Without ever making it feel less than contemporary, Antonoff borrows from different acts of the era; "Shadow's" has a jangly Graceland guitar line and "You’re Still a Mystery" has a New Order bounce. But the biggest touchstone is 80’s Bruce Springsteen. Antonoff often sings in a Boss-like, manly croon and lets himself loose on full-throated choruses. While the album is considerably brighter than Tunnel of Love, the synths sound the same. In its affinity for Springsteen, Bleachers feels like a cousin of another New Jersey act, The Gaslight Anthem. But where that band mixes its Springsteen influences with Social Distortion working-class punk, Antonoff takes them in a more new wave direction. The songs are nervy and fast-paced without ever spinning out of control, hitting breakneck speed, or doing anything that would make them inaccessible in any way. Antonoff never fails to go for the big, sing-along chorus.

Antonoff is dating the actress Lena Dunham, whose TV show, Girls, focuses on young characters trying to figure out themselves and their relationships. It makes sense that these two are a couple. Strange Desire is full of songs about complicated people in complicated relationships. Antonoff has talked in the media about depression, anxiety, and panic attacks and just like people have speculated about Dunham’s character on screen and who she is in real life, many of Bleachers’ songs feel like they could be autobiographical. Antonoff, like Dunham, is keenly aware and unashamed of his own neurosis. He sings “I've played the victim for a long long time/And I wanna grow up” earnestly. He chose a song called "I Wanna Get Better" as his lead single. And he closes the album with a spoken word sample of a woman’s voice saying “And I really want to be grateful for the experience that I’ve had.” What could easily be too much navel-gazing and therapy-speak is saved by Antonoff’s Springsteen affinity. A line like “While my friends were getting high and chasing girls down parkway lines” from "I Wanna Get Better" recalls Bruce’s Jersey heroes and gives the song a specificity (in this case of place) and a larger, more romantic view of the world that taps into the archetypal and the universal, while also keeping the songs fun.

Some of Antonoff’s best work so far has come in collaborations, whether with Grimes or Taylor Swift, and he’s one of our first great songwriters to come up in a time where genre lines and indie versus mainstream have virtually stopped functioning as meaningful categories. As such, Antonoff is free to pursue success on his own terms. He wants to make pop music that doesn’t pander and isn’t snobby either. If none of Strange Desire sticks with you quite like 1989, well, not many albums can claim that either. Antonoff has made an album of pretty songs that, even while being aimed at the widest audience, feel like they couldn’t have been written by anyone else.