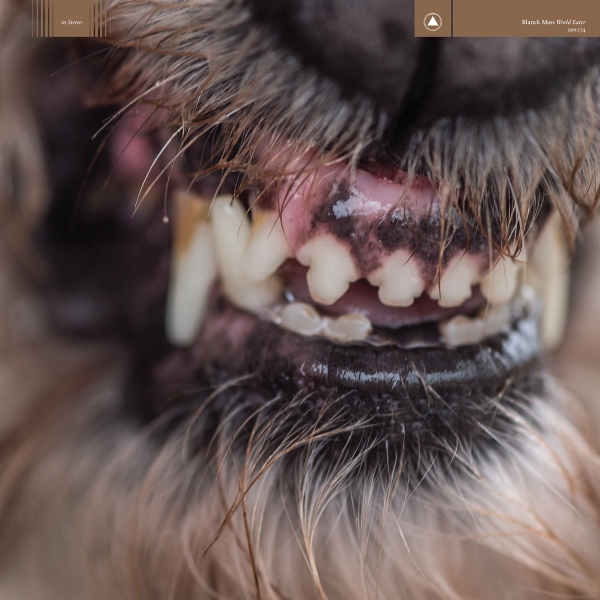 Near the close of Alien 3, David Fincher’s maligned-then-admired contribution to the Alien franchise, the beleaguered protagonists hit upon a plan to destroy the organism stalking them through the prison/foundry corridors that they’re trapped within.

Without access to any effective weapons they lure it into the foundry’s molding facility, where they expose the alien first to molten lead and then to freezing water, the violent shift between the extremes causing the creature to shatter and explode.

There’s much the same impact listening to World Eater, the third album from Ben Power’s Blanck Mass. Across seven tracks and fifty minutes it alternates from battery to caress, caustic noise tag-teaming with melancholic ambience and drawn, distended vocals, the even numbers a bloody fist of violence and abrasion that the odd ones can’t quite soothe away. It’s a discomforting experience, wrenching from one state to the other, bracing for the change, but an exhilarating one for those that can endure it.

And hey, it’s not as if we weren’t warned. ‘The human race is consuming itself’ asserts the press release, beneath the queasy album artwork of a close-up canine jaw. ‘We are aware of our inner beast and should therefore be able to control it... Unfortunately, this is not the case.’ We’re used to album notes overstating the brilliance of their artists or the uniqueness of their sound, but setting out to terrify us - not so much.

It opens with "John Doe’s Carnival Of Error", a sinister lullaby of fairground chimes and industrial hiss that gives way suddenly - like a trapdoor - to a fever of mangled voices and frantic beats, as if the end-of-pier ghost-train had collided with the Waltzer next door. A mere two seconds of breathing space precede "Rhesus Negative", an uncompromisingly intense nine minutes of searing volume, half-heard chanting and B-movie synths that’s likely to prove the litmus test for whether many listeners carry on.

Bailing here would be terrible, though, because then they’d miss "Please". Building artfully from a low-key opening through garbled yet strangely soulful vocals it’s a perfect marriage of atmosphere and rhythm, of machinery and heart, its pulsing bass and swooping drops as suited to lonely introspection as a heaving club. Ditto "Silent Treatment", the wall-of-sound of its beginning belying a disarming tenderness in the yearning voices and eastern melodies, the sudden cascades of rushing synths balanced out with hypnotic loops - all the more sublime for being nestled amidst the chaos.

Fans of drone are well-served in "Minnesota/Eas Fors/Naked", the crackle and crash of static and hiss blurring into a meditative wash of reverbed whispers and minor notes, a rare respite from the sonic assault that flows quite unexpectedly - almost amusingly - into an 80s drum patter that rivals Bon Iver’s "Beth/Rest" for incongruity. "Hive Mind" soon closes that open mouth, however, refocusing World Eater’s close on an uneasy shuffle of Fever Ray pitch-shifted vocals and euphoric swells, the main hook an appropriately savage, barking gnash atop an end-of-days cataclysm of grinding synths and machine-gun beats that fades out, finally, to tinnitus and disorientation and a Stockholm-syndrome grin.

Power might describe these as 'actual love songs' but they’re unlikely to be mood-lighting any amorous scenes sometime soon: try sneaking "The Rat" into a Valentine’s Day playlist and you’re likely to be facing divorce. But as a soundtrack to uneasy times this is immaculate: bracing, bruising and comforting all at once, an oxymoron of discordance and fragility in thrall to noise but with warmth in its shadows. It might not hit Dumb Flesh’s dancefloor highs but with decent headphones and a windswept night there’s points on here that are damn near-transcendental, although the damage left might be permanent.