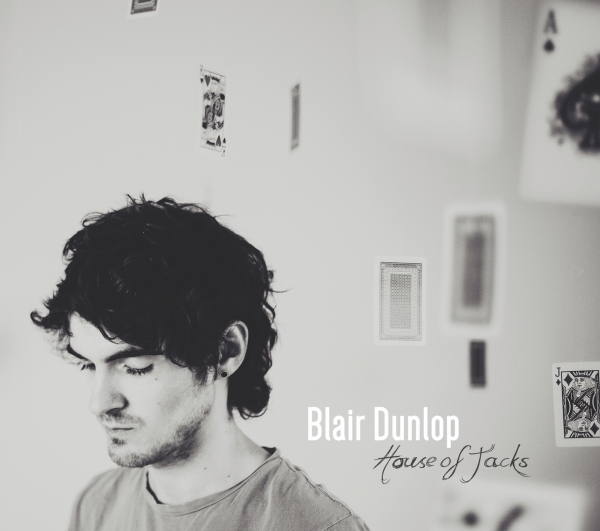 When an eighteen year old Blair Dunlop chose “Canadee-I-O” to open his debut EP, it was the boldest of beginnings. The traditional song is synonymous with Nic Jones’s seminal, celebrated 1980 recording, and Dunlop’s take was creditable.

If the passing down of tradition determines the folk scene’s dynastic streak, it must also encourage an evolutionary spirit. Catching up with Dunlop (the son of Ashley Hutchings) four years on, second album House of Jacks carries a distinct transatlantic twang. Fortunately for UK folk fans - in much the same way that Richard Thompson never lost his Englishness as an LA-based expat - so Dunlop’s heritage is not drowned out by the Pacific sunshine sound borrowed from west coast heroes.

House of Jacks - and Dunlop’s second coming of age - are announced by a modern morality tale. “Something’s Gonna Give Way” is vivid, percussive and brisk; the tune’s clean-lined clarity and repeating riff implying an air of inevitability to the dramatic denouement of schoolyard retaliation. The lyrics are trepidatious from the start but the song’s stark warning risks overlooking the stoics.

Dunlop’s songs are strikingly well-constructed, in both the exemplary fingerstyle guitar work and deft wordplay. He rhymes in figure-eights, joined loops like twistled straw. First album Blight and Blossom had the odd lyrical gaucherie that jarred with the maturity of his playing - but this writing is tighter. Dunlop’s folk heritage is ingrained but his themes are modern: modish lodestones for timeless traits.

Two tracks on the album give accounts of a nightclub forty-five years apart, in 1969 and again today. The former is gently jovial, with references to decor, drugs and equality. Dunlop cashes the upbeat idealism on the return, which strikes just the right note of nonchalant scorn (“Meet me at the entrance, bring your ego we’ll be fine/We’ll catch the VIP train and pass the people stood in line”), with an easy, sun-soaked melody that’s hard to resist, even if the AOR styling seems better-suited to those who remember the first time. Whether wittingly or not, Dunlop sounds more nostalgic for the current incarnation, as if pre-empting reminiscences four and a half decades hence.

“The Ballad of Enzo Laviano” is also football-focused and blues-infused, imagining the apprehension of a big club’s small-town transfer target. Set in steely grandeur, there’s more than a shade of danger in the dilemma, and imposing tones dominate the fictional protagonist, a pawn in the beautiful game.

While the album might be criticised for its soft rock penchant, it still caters to a wide palate. “Different Schools” is full-bodied and slightly epic, expansive organ scales ascending with sultry singing that showcases an impressive vocal range. The title track’s devotional, exalting opening provides perhaps the album’s finest minute, sharing a philosophical self-awareness with the following “Chain by Design”, a pondering, peaceable ode to determinism.

Dunlop is a thinking man entrenched in the folk tradition and House of Jacks displays more finesse than flair. This is a very tight set, sympathetically produced and moving towards the mainstream. “Something’s Gonna Give Way” (notably, the only song to use third person narrative) casts a lasting shadow and the album merits repeat listens to illuminate its different textures. The engrossing “Song of Two Bridges” - co-written by Hutchings and Ken Nicol - is a welcome acoustic note on which to close.