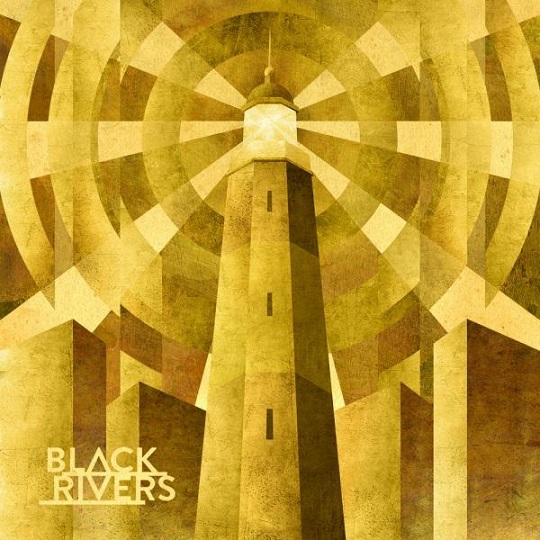 Listening to Black Rivers debut reminds one of a line from The Walker Brothers,“Breaking up is so very hard to do”. Andy and Jez Williams spent over two decades with lifelong friend Jimi Goodwin in Doves and Sub Sub, before embarking on a hiatus in 2010. Whether they will all ever record together again is unclear, but it certainly wasn’t an acrimonious parting, rather a desire on both sides to try something new. Last year Goodwin released his debut Odludek, which sounded more playful than anything he’d done before, yet retained imprints of his former bands soul, particularly that of the Northern variety. Now the Williams twins have remerged with the eponymously titled Black Rivers, which channels their alma mater’s affection for epic guitar music, but adds a more electronica tinged colour to its pallet.

Recorded in part in a remote cottage, the surround of Black Rivers is nature, with constant references to the elements, the countryside and the sea. Upcoming single “The Forest” is a case in point, boasting a lovely swelling chorus, with singing that sound like a 60s folk troupe wrapped around a space age groove. They’ve not severed connections with their past however. “Wind That Shakes The Barley” isn’t the all-out house of Sub Subs “Ain’t No Love (Ain’t No Use)” but nonetheless it’s a euphoric slab of psychedelia that wouldn’t be out of place at a rave. “Diamond Days” has the same touchpoints as “Words” from The Last Broadcast with a similarly lilting, repetitive guitar hook and gentle voice. It segues into “The Ship”, which starts as a sea shanty then thrillingly mutates into a Kraftwerk workout replete with effect laden vocals.

Which brings us to the key difference with Doves, and that’s the singing. Both Jez and Andy sang lead vocals on several Doves songs, most memorably on Lost Souls “Here It Comes”. But whilst their voices provided a change in colour from Goodwin’s resonant rasp, a whole album without his voice requires a change in mind-shift from the listener. When the vocals work, which they do in the main, it’s when the delivery is tender, such as on first single “Voyager 1”, which revolves around a thumping Northern Soul beat and the voice is less a lead instrument but part of the overall musical soundtrack. Occasionally they misjudge it, “Age Of Innocence” would have made a wondrous instrumental, but the punk like snarl doesn’t match the effortless urgency that Goodwin brought to a song like “There Goes The Fear”.

The music is a consistent joy though. “Harbour Lights” is an immersive, largely instrumental piece with a sample of a French chanteuse warbling in the background. She could be reciting the latest Jeffrey Archer novel for all I know, but it sounds decidedly sophisticated and it makes you think that Black Rivers could write a brilliant film soundtrack. They’ve dabbled with the idea before, “Jetstream” from Kingdom of Rust was written with the end credits of Bladerunner in mind – check out the YouTube interpretation.

“Coral Sea” returns to the recurrent nature motif. The flamenco guitar picking lends it a melancholic grandeur, underscoring the voice beautifully and reminiscent of fellow Mancunian Vini Reilly. It’s the best thing here and waltzes into the closer “Deep Rivers Run Quiet”, which sees them catch their breath, it’s a mournful elegy, with the pastoral feel of the record embodied in the line “Silent life is just a modern fear.”

They’re certainly not hiding their light under a bushel, with upcoming arena shows supporting Elbow and Noel Gallagher and given the cinematic feel of the songs here, musically they'll fill those venues with ease. Whether Doves will make another record together is a moot point, as a unit they complimented each other wonderfully and to return to The Walker Brothers song, breaking up might not be easy, perhaps it's the right thing for Doves to do, but I hope not. In the meantime Black Rivers are creating sombre yet euphoric, uplifting music that shows how to sound far out whilst still retaining the knack of writing beautifully cohesive songs.