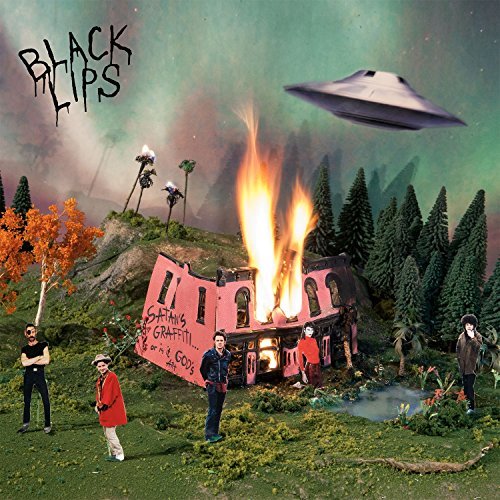 Of all the garage rock bands to have emerged in the early part of this millenium, few would have bet big money on Black Lips to be the ones who’d still be around to release a ninth album in 2017. Yet they’ve always been able to pleasantly surprise.

First coming to the attention in 2003 with their self-titled debut, they've never been a band to shy away from going the extra distance to make a long lasting impression. Satan’s graffiti or God’s art sees them strengthen their reputation for writing quick witted, three minute punk steeped in good ol' traditional American rock ‘n’ roll values.

The jazz-tinged brass inflections and smooth groove of "Overture" slowly usher the album in, before the raucous and galloping rhythm of "Occidental Front" jumpstarts it to life. "Can’t Hold On" is a four-and-a-half minute long, stomp-filled slab of similarly gritty garage rock equal to their past career highlights, but within we also catch sight of a band pushing themselves into new territory.

Though a rambunctious nature still lies deep within these songs, we see glimpses of a band pushing forward on the dark, dirty strut of "Got Me All Alone", which sounds like The Cramps after an all night bender. Elsewhere, "Crystal Night" is a mariachi influenced, slow burning mood setter, while "Squatting in Heaven" sees the amps turned back up to 11 for an injection of psychedelic texture to their naturally occuring punk rock cacophony.

It’s with songs such as the primal, fuzzy garage rock of "We Know" and "It Won’t Be Long" that Black Lips show they're are still as vital today as they were when Good Bad Not Evil fired them to wider recognition in 2007. Satan’s Graffiti or God’s art? shows that while other bands may find themselves naturally winding down when several albums in, Black Lips are still going from strength to strength.