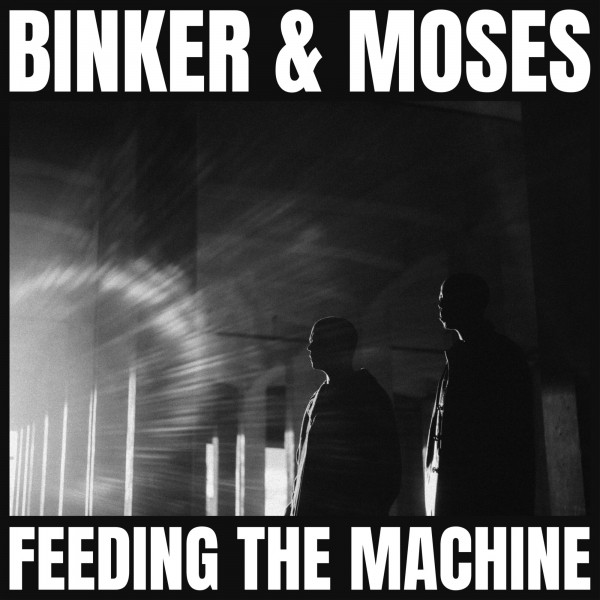 The recorded story of saxophonist Binker Golding and drummer Moses Boyd’s duo is one of gradual expansion, with guest musicians brought in to stretch out the palette on past albums. Feeding The Machine marks a return to the self-imposed tonal restrictions of their improvisational tenor sax and drums duet origins, but with a significant twist.

On Feeding The Machine, the modular synths, tape loops and electronic sound manipulation of Max Luthert (sometimes bending the sounds generated by the duo in real time) are featured prominently. Rather than proving a clunky third wheel that messes with the duo’s stage-honed telepathy, the added electronic interference and interpretation adds a rich layer of atmospherics and depth to the remarkably agile, muscular interplay and musical imagination of Binker & Moses.

Feeding The Machine seamlessly blends throbbingly physical beat and riff science with an air of desolate introspection. For example, check out the final stretch of the drone-assisted funky drumming of “Accelerometer Overdose”, with Golding's saxophone cooking up a convincing impression of an angrily buzzing swarm of killer bees flitting in and out of the frame.

This is acutely powerfully, thrillingly alive music you can equally well move or mope to. We're not dealing with songs or compositions here as much as gradually intensifying trips to uncharted territory. Whether it's unkempt, skittering free jazz abstractions, riff-building minimalism (the jaw-droppingly hypnotic “Feed Infinite”) or haunting, ambient mood pieces (“Because Because”), the potency of the proceedings never dips – which is all the more impressive considering that the duo reportedly entered the studio with nothing planned.

There's no shortage of acts blending electronics with jazz instrumentation and aesthetics: Ishmael Ensemble, James Holden's Spirit Animals project, the heady cosmic explorations of Szun Waves, and Boyd's acclaimed solo turn on 2020’s Dark Matter; to name a few. However, the unstoppable momentum of hypnotic build-ups and genuinely unique, masterfully maintained combination of moodiness and muscular physicality that characterises Feeding The Machine place Binker & Moses far ahead of the combination.