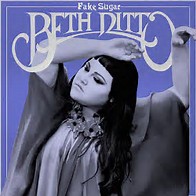 Fashion designer, agony aunt and model are just some of the proffesions Beth Dito has successfully turned her hand to in recent years, but despite such branching away, it’s still her work as frontwoman of art punks The Gossip for which she is best known. However, her solo debut album Fake Sugar contains many signs that this might soon change.

It may now be over ten years since The Gossip first came to mainstream attention with their 2006 breakthrough Standing in the Way of Control, but the dance grooves and funk flecked basslines of songs such as "Listen Up!" helped form a template that served them and the many who followed in their wake very well. One of the band's hallmarks was always Ditto's strong and soulful vocals, and as such it's no surprise to hear her debut long putting them at the forefront.

With its opening, stuttering guitar groove, first track and lead single "Fire" will automatically appease those who've had their interest piqued by Dittos' past muscial adventures. It, along with the rich soulful pop of "In and Out", would sound right at home on The Gossip's last LP (2012's A Joyful Noise), but there are enough signs to indicate that her focus her is not solely on retreading previously covered ground.

Both "Ooh La La" and the multi layered soundscapes of "Go Baby Go" have a similar rock strut to The Kills more recent offerings. Further strides away are made on the saccharinely grandoise 80s style pop ballads "Love In Real Life" and "Lover", but neither can be viewed as being among the record's true high points. Instead, there's a run where an undercurrent of 70s influenced disco grooves pulsate through the heart of each song that this album reaches its creative peak.

The Gossip may currently be no more, but with Ditto's solo album, we have a replacement that fills the void.