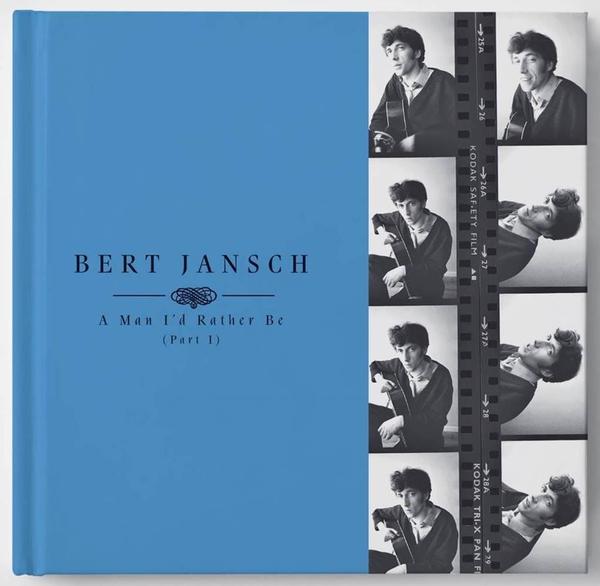 It’s almost impossible to imagine now but folk music - the sound of one person accompanied only by their acoustic instrument - was once the music of choice for the hip individual, a cool alternative to the banalities of pop.

In the UK, the undisputed leading name of this early 60’s folk boom was Bert Jansch. If stature was calculated according to scale of influence, Jansch would be a huge star, having gone on to inspire not only contemporary songwriters ala Roy Harper, John Martyn and Nick Drake but also the likes of Johnny Marr, Graham Coxon and Jim Ghedi, and even Led Zeppelin. First of two new box sets repackaging Jansch’s 60’s run of albums, A Man I’d Rather Be (Part 1) revisits the key records that Jansch’s enduring cult is built on.

Neil Young called Jansch - who passed away in 2011 at the age of 67 - the Jimi Hendrix of acoustic guitar. Jansch's dextrous and driving playing, characterised by endlessly shifting patterns and the percussive snapping of the bottom strings against the fretboard, is drenched in virtuoso skill. Displays of whizz-like technical prowess in the style of contemporary and main inspiration Davy Graham or, indeed, Hendrix isn't the sole focus of these albums. Instead, Jansch's roots are deep in the very foundation of folk music: songs and storytelling.

The two albums that launched Jansch's recording career and form the first half of A Man I'd Rather Be (Part 1) showcase him as a songwriter. Of these, the self-titled debut is the acknowledged classic. Deservedly so: the tunes are uniformly strong, Jansch's unconventional voice (earning inevitable comparisons to the most famous solo folkie of all, Bob Dylan) is charismatic, and there's the ageless, haunting masterpiece "Needle of Death", the melody of which Neil Young appropriated for his own "Ambulance Blues", and which ranks alongside the Canadian legend's "The Needle and the Damage Done" as one of the most powerful anti-heroin songs ever cut. Also from 1965, It Don't Bother Me is just as strong. It may lack classics such as the debut's "Running From Home" but the earlier album's handful of slightly clichéd hard travelling, ramblin' troubadour tales are swapped for an idiosyncratic songwriting style with plenty of alluring twists: witness how the uncharacteristically chirpy mood of "Ring-A-Ding Bird" curdles into something much darker during the song's haunting final section.

Recorded in a friend's apartment on makeshift equipment (as was Jansch's debut), Jack Orion might just be the set's one bona fide masterpiece. It's hard to think of a record more at odds with the multicolour psychedelic whimsy that was becoming increasingly all-pervasive around the album's release in 1966. Starkly monochrome in presentation and tense in tone, Jansch - guitar and voice both packing a newly acquired bite - infuses these renditions of traditional British folk ballads with great intensity and insistent force. The tragic tales of "Nottamun Town" and murder ballad "Pretty Polly" are delivered with an air of energetic agitation that renders the ancient tunes totally fresh, whilst "Blackwater Side" - Jansch's guitar churning, tossing and turning restlessly like it’s trying to secure footing in an overflowing river - provides a spot of beatific calm, resulting in an album that provides a master class in digging up and reviving traditional material that's up there with Dylan's World Gone Wrong. Jansch's future Pentangle bandmate John Renbourn guests on second guitar and the guitarists' mainly instrumental, jazz- and blues-influenced duo album Bert & John (also from 1966) closes this hugely impressive set on another high note.