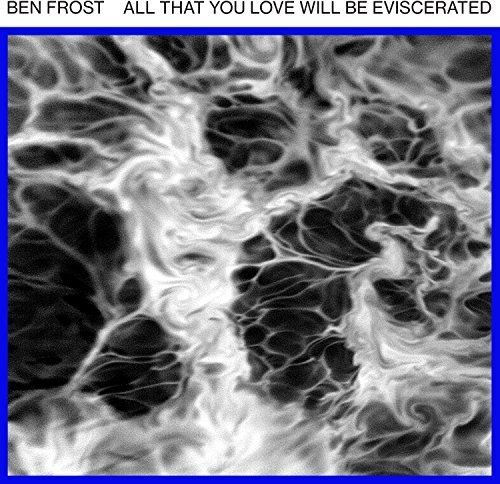 Eviscerate. “To disembowel (a person or animal)”; “to deprive (something) of its essential content.” It’s a violent word.

. It contains shades of viscera, something essential, bodily, something that goes right to the core. It’s also apt, Ben Frost’s music being all these things. Menacing and machinal, his electroacoustic compositions confront the darker forces that plague our world. Recent projects have seen Frost spend time in the war-ravaged nation of the Democratic Republic of the Congo, and later, embedded on the USS Theodore during a sustained bombing campaign against ISIS.

On last year’s sublime LP The Centre Cannot Hold, the target of Frost’s caustic sound was, in part at least, the social unrest that bubbled to the surface during the 2016 US presidential election. “I was in NYC the night of the election and it was fucking terrifying,” he recalled in an interview at the time of the LP’s release. Recorded over the course of ten days at Steve Albini’s Electrical Audio studio complex in Chicago, its ten tracks unleash waves of abrasive, primal noise. Frost himself seems barely in control.

Six months on, this six-track companion EP pairs standout Centre track “All That You Love Will Be Eviscerated” with unreleased originals and reworks from Albini and electronic maestro Alva Noto. Like Centre, and much of Frost’s output before it, it is music of sublime physical force, built mainly from noisy, unidentifiable sounds brutally severed from their sources. A harsh, metallic sheen permeates ‘Self Portrait in Ultramarine,’ and something like a tectonic version of Colin Stetson’s saxophone growl can be heard throughout “Goonies Never Say Die”. It is also music of extreme drama: those visceral, intensely gestural moments suddenly giving way to stretches of brooding calm, like entering the eye of a storm, as at the end of “An Empty Vessel to Flood”.

Given that Albini played such an instrumental role in bringing Centre to life, his presence here is unsurprising. His rework of Centre’s “Meg Ryan Eyez” is a highlight: a brief interlude of slow, glassy drones that almost recalls the breathy instrumentation of Björk’s most recent release. It’s contrasted with Noto’s no less impressive take on “Ionia”, in which the German producer pairs his characteristically clean, precise electronics with Frost’s rougher, more corrosive palette. But Albini also features in a gag-reel moment at the beginning of “Self Portrait in Ultramarine”. No sooner has the producer told Frost that he “is rolling” (just as he does on Centre’s “Threshold of Faith”) than Frost fails to apprehend a sneeze. “Favourite part,” Albini quips.

This may seem like little more than a light-hearted incident committed to record in order scythe through the heavy load of Frost’s sound. But, given that Frost’s work is so elemental, we also need the occasional reminder of its creators, that this is music by and about distinctly human forces, and that there is meaning in Frost’s unique brand of sonic terror. A sleek supplement to last year’s LP, All That You Love Will Be Eviscerated is worth seeking out for its pure, visceral thrill.