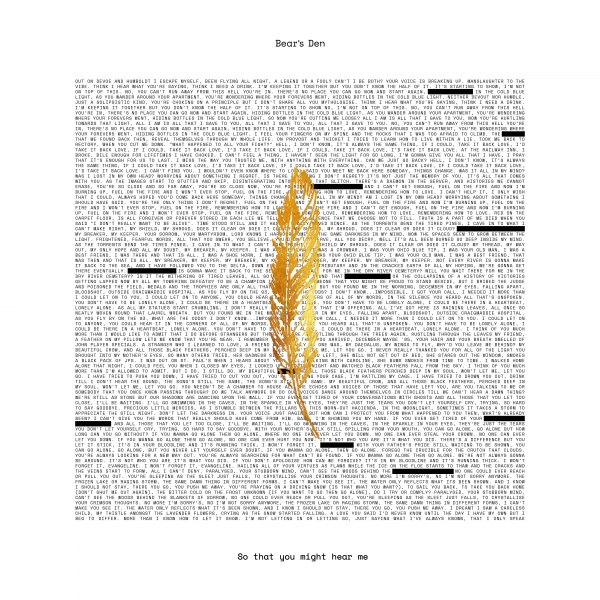 Previously dividing opinion for sticking to a mould broadly shaped by Mumford & Sons, Bear’s Den’s two year hibernation has paid dividends as they showcase their musical maturity and experience through this refreshing album that pushes their sound to pastures new.

Whereas Bear’s Den’s second album Red Earth and Pouring Rain was written in just 3 weeks, their newest album So That You Might Hear Me took a painstaking year to create and complete and it has been worth the wait. Unconstrained by any set genre dictating the album, Bear’s Den’s newfound sonic freedom is evident from trumpets and electronics, to ethereal guitar-riffs and the familiar and reassuring vocals of Andrew Davie; “the aim was to be more honest and instinctive, like when you blurt something out and can’t take it back, so you have to deal with it”, says Davie.

The result of Davie’s instinctiveness is a refreshing honesty and a sound that parts way with predictability. Opening track, “Hiding Bottles” shows a hidden depth to Bear’s Den’s lyrics as they roll out in a stream of consciousness, addressing past demons and hidden emotions that not even Davie knew he would sing about. The opener is a song of intent, cleverly appeasing the original Bear’s Den fan base whilst subtly teasing a newer sound that is expanded upon as So That You Might Hear Me continues.

Tracks such as “Fuel on the Fire” and “Not Every River” are both grounded in familiarity but uplifted by effervescent electronic sounds that shoot through the heart of both tracks in staccato rhythm; the effect creates an essence of ethereality and otherworldliness to Bear’s Den’s latest album, not too dissimilar from the effect of Sufjan Stevens’ Planetarium.

At the same time, Bear’s Den keep to a theme of honesty and intimacy with their listeners with tracks “Fossils” and “My Breaker My Keeper”. Both songs serve a similar purpose of heightenning the emotional relationship between Bear’s Den and the listener. All of this is in preparation for the mesmerising centrepiece track “Crow”, whose emotive lyrics and soothing guitars set against the backdrop of guiding trumpets all flow into one to cement Bear’s Den’s latest album as their best.

Bear’s Den have shown that with time and patience, a band previously squashed into a sound market that is way too saturated can move from safe yet standard to risky but rewarding composition, whilst nostalgically holding onto its roots.