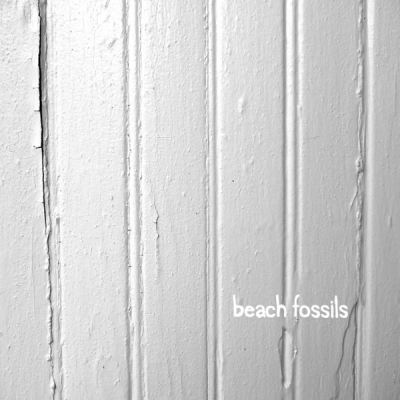 British summers are almost impossible to enjoy. Every barbeque, every day spent in the park, every decision to wear shorts is tinged with worry and fear borne out of knowledge that this little Northerly isle is prone to rain at any given moment. The cold, windy climate is now no excuse for only producing fast, tip-toe indie bands though, given that Beach Fossils, in spite of their languid, hazy sound saying differently, come from the not-so-warm climes of Brooklyn, New York.

There can rarely have been a name more fitting of a band than that of Beach Fossils, who make a sound more drenched in rays than most of their west coast counterparts. Together for less than a year, the band quickly managed to drum up support through live shows and mentions on the right blogs. This eponymous debut is the result of a whirlwind 12 or so months, showing no sign of the stress or strain that such a turnaround must’ve caused. The ‘lo-fi’ label is chucked around with disregard these days, and the fuzzy distance on this record is certainly show symptoms of that, but it’s almost certainly been a stylistic decision rather than a product of laziness.  Each song is the sonic equivalent of a home video shot on a super 8 – sun bleached, jittery with production values that only extenuate the brilliance that lay within of the sound.

It’s a joyous racket, seemingly free from worry and doubt – the vocals are lost within the swirling riffs, but this is a long player that is much more about vibe than anything else. There are, of course, stand out tracks – a favourite from the days when they were just a hype band with a couple of demos, Daydream still gleams with all its kaleidoscopic charm, whilst the rest of the album sit in the shadow of dream pop and shoegaze, happily paying homage whilst carving out its own surf-pop infused niche. There are certainly other bands around treading similar ground – in the UK, Spectrals take similar tack with their sound (though certainly not in vocals), whilst comparisons to Real Estate and Smith Westerns are not without truth, there’s nobody who quite pulls off this clued up surf boy pop with quite the same conviction

One sticking point is the lack of variation in tracks – there method is to smother you with noise rather than trying to win you over with variation. In truth though, the short running time – stretching out at around 34 minutes – mean there’s little chance of growing bored of this sound. The core ingredients are always the same, with a simple riff being the core around which the simple percussion and distorted vocals weave themselves. Released on ridiculously hip captured tracks record, the target audience for these tracks are probably already deeply in love with Beach Fossils. However, for the sake of your summer, this is one record that you absolutely must try get into. It’s certainly not the most intelligent thing that’s been released this year, but it’s certainly amongst the sunniest.