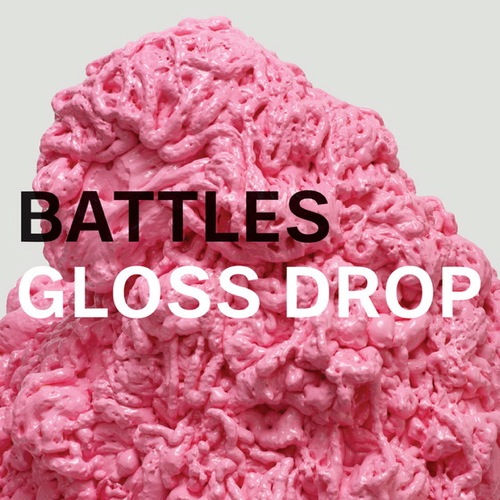 No matter what Gloss Drop is (and it’s nearly an impossible record to define or categorize), or what it will eventually become for listeners, the long-awaited sophomore album from Battles will invariably be judged by what (or specifically, who) is missing; namely vocalist/multi-instrumentalist Tyondai Braxton, who left the band shortly before recording began to shift his focus onto his solo work. But rather than feeling the pressure of finding a sole replacement for Braxton’s looped, frenzied vocals, the remaining trio enlisted a cadre of guest-vocalists to fill in whatever lyrical pieces they found missing in their tempestuous, idiosyncratic sound, while boldly pushing their experimental style forward and expanding the untamed sonic boundaries that featured prominently on Mirrored, their wildly inventive debut.

Core members Ian Williams, John Stanier and Dave Konopka have audaciously deflected any concerns or comparisons fans might have had over Braxton’s departure by crafting a dynamic new album that not only builds on their fresh, spirited sound, but also represents a clear Battles 2.0 version that, while being a bit more erratic than the original outfit, still maintains the volatile element of surprise that pulsed at the heart of their early work. The propulsive, relentless drumming of Stanier still forms the backbone of these unorthodox numbers, as he keeps the beats tight even while all hell seems to breaking loose around him musically. Williams and Konopka dig a bit deeper into the influences of world music that lingered a bit below the surface of their debut, but on Gloss Drop those disparate,  far-reaching echoes reverberate through nearly the entire album,  coloring it with a rich, vibrant tone that is quite celebratory and dynamic.

The album launches with the emphatic ‘Africastle,’ which pulses with a tension that quickly is released amidst Stanier’s on point rhythms that blend well with the rapid fire guitar and keyboards that are layered over the top of the track. ‘Ice Cream’ is as happy sounding as a song by that name should be, with hints of Animal Collective found within the jubilant vocals of Matias Aguayo and the playful keys and jaunty, disco beats. It’s as lighthearted as Battles has ever sounded, and the song soars because of that fluid, effervescent spirit. But any longtime fan worried about a drastic departure for Battles need only listen to ‘Futura,”Inchworm,’ and ‘Wall Street,’ which all churn with the same buoyant sonic inventiveness that caught our attention in the first place. They also prove that their songs can be equally as captivating,  if not more so, as instrumentals, doing away with any cumbersome vocals which don’t fit the song’s fervent, free-jazz melodies and cadences.

When the track listing was first revealed for Gloss Drop, easily the most eye-catching aspect of the new batch of tunes was Gary Numan’s guest vocals on ‘My Machines.’ And while the track has a dark,  industrial edge to it that suitably compliments Numan’s robotic vocals,  the song doesn’t really catch a spark, and winds down before anything all that memorable happens (other than the simple fact that Gary Numan recorded a song again). ‘Dominican Fade’ serves as a transition from one half of the album to the other, and features some nice Latin-flavored fills from Stanier, but otherwise is a slight track that, along with ‘Toddler’ clocks in at well under two minutes and doesn’t stick around long enough to make a lasting impact.

While ‘Sweetie & Shag’ is another collaboration (with Blonde Redhead’s Kazu Makino) that looks better on paper than it sounds in your ears, the song is as close to pop as anything Battles have ever attempted, and Makino’s breathy vocals should draw them some new fans if the track ever breaks on the proper channels. Thankfully, things get interesting (and downright weird) again on ‘Rolls Bayce,’ which features a foreboding, futuristic din that chugs along on top of Stanier’s steady drums. It’s a two-minute blast of creativity that burns out quickly, and is over in a flash, which only adds to its urgent volatility.

‘White Electric’ takes a long time (nearly too long) to light a fuse,  but when it does some real magic happens. A cacophonous flood envelops the listener as the song churns insistently around them, with little time to wonder exactly how they are making this type of unique racket,  leaving only the breathless rhythm of Stanier to anchor yourself with amidst the untethered din. And thankfully the song winds down with a childlike coda which allows us to catch our breath before the slow burn of the album closer ‘Sundome,’ which features the textured, layered vocals of Boredoms’ Yamantaka Eye over the top of carnival-like beats,  keyboards and steel drums. And while the collaboration again doesn’t quite catch fire as much as you’d think it would, it still finds Battles pushing their sound and scope in a new, unexplored direction, as well as getting a chance to work with another one of their musical inspirations. And as long as the band is willing to take chances and seek out new and interesting musical challenges, along with displaying the inventive, innovative sound that garnered them our acclaim and attention in the first place, we’re bound to keep listening if only just to hear what they come up with next.