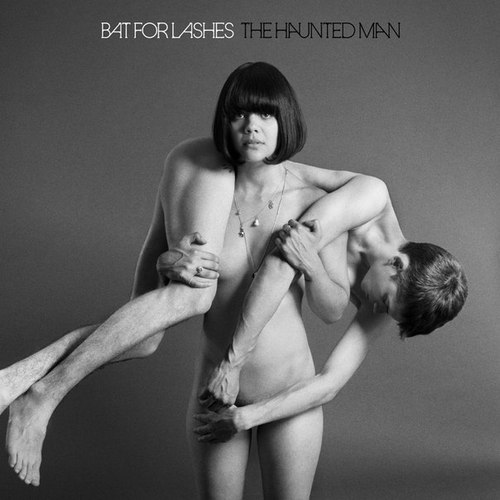 The monochrome’s the first hint. Granted, it might not be the most newsworthy aspect of The Haunted Man’s cover, but put this album next to Bat For Lashes’ earlier work and the lack of colour is glaring. Then there’s the videos, starker and more confrontational than previous efforts, stylishly shot but still rawer than we’re used to from an artist previously wedded to theatrics. This is Natasha Khan’s personal album, and she’s pretty keen for us to know it.

“I don’t want to hide any more”, said Khan in a recent interview, and certainly the recent marketing has been a clear remove from earlier fare: the video to 2009‘s ‘Pearl’s Dream’ had her cavorting with wolves whilst a blonde-wigged alter-ego channelled a David Lynch movie. And whereas previous lyrical themes have ranged from myths and fantasy, wizards and armour and celestial orbs to, well, the Karate Kid, here the content is a touch more grounded: meditations on former loves and sex and death, on wintry landscapes and nights out dancing.

Of course, piercing, vulgar reality might not be what we’re looking for in a Bat For Lashes record. Thankfully on a musical level there’s rather less change. Opener ‘Lilies’ sounds a familiar note, Khan’s voice reverbed and stunning as subtle chords chime atmospherically behind. The instrumentation’s lusher, perhaps, the production a touch more pronounced, but the characteristic blend of synths and strings, ivory and percussion remains preserved. It’s tinged with more of an urban hue this time around, however, the twilit mists and full moon howls augmented by an electronic pulse, the basslines deeper and the beats more overt.

It’s most apparent on ‘Oh Yeah’, a sample-wracked fever dream of drum machines and commingling synths, writhing beneath the kind of flagrant sexual yearning last seen from Britt Ekland in The Wicker Man. “Here am I/Looking for a lover to climb inside/Waiting like a flower to open wide” sings Khan damn near pornographically, the album’s cover suddenly puritan by comparison. Elsewhere second single ‘Marilyn’ presents The Haunted Man’s most leftfield moments, giving way at the midpoint for Orbital arpeggios and garbled, wraithish voices, an exorcism by way of Passion Pit’s ‘Sleepyhead‘.

‘Laura’ remains a highlight, of course, a mid-album comedown as quietly affecting as it is compelling, although for most of us it’s likely wrung its tears already: certainly there’s something to its charms that already seems nostalgic, the melodies worn like old furniture or a half-burnt candle. But the album’s most stirring moments arguably aren’t even Natasha’s, her own contributions to the title track upstaged by the male chorus halfway through, their harmonies deep and hymnic and evocative of some older, nobler time.

That’s not to suggest it’s all sombre emoting: this remains an album that’s restlessly kinetic. ‘All Your Gold’ should be bigger than Two Suns’ ‘Daniel’, an immaculate pop song with a killer chorus to atone for its slightly dubious metaphor, whilst ‘A Wall’ welds gothic imagery with dancefloor verve. The penultimate ‘Rest Your Head’ twinges with nervous energy, a nocturnal tryst of siren vocals and Yeasayer erraticism soundtracked by Hammer Horror.

Across a fifty-one minute runtime there are very, very few missteps. ‘Horses Of The Sun’ overstays the welcome of its pagan drums and sultry vocals with a chorus that grows wearying, whilst glitchy closer ‘Deep Sea Diver’ leaves little mark, its gossamer threads slightly flailing in the tinnitus of the tracks before it.

But this is nitpicking. The Haunted Man is an excellent album, possessed with enough innovation to carry Bat For Lashes forward without disturbing the flickering half-light that their sound inhabits. Natasha Khan may have opted to bring herself out of the forest but this is still music from another place, windswept and shadowed and shrouded in otherness. And that cover? The cover’s by far the least interesting thing here.

Listen to The Haunted Man