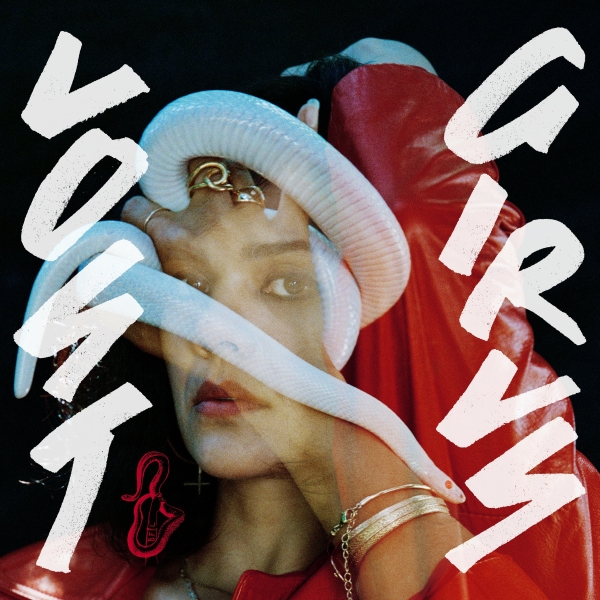 Music reviews are not always immune to personal taste. Reviewers try to be as objective as is humanly possible, while trying to second-guess what the public will enjoy about the album they’re reading about. It’s not an exact science, nor should it be taken as gospel – we're all human, and we all have favourite things, be they albums, movies or pop culture trends.

Some music reviewers, for instance, might petition their editor to be given the chance to review the new Bat For Lashes album, Lost Girls, knowing full well that they’re going to enjoy it. They’ve keenly observed the promotional material, and listened to all of the songs released ahead of the album. They were excited about the signs pointing to a gender-flipped Lost Boys concept, complete with ‘80s new wave signifiers in both sonics and visuals. Sometimes, impartiality is futile – never more so than with an album like this.

This is Natasha Khan’s fifth album under the Bat For Lashes moniker (she also released the collaborative LP Sexwitch with TOY), and it’s also her best. Everything seems to have slotted neatly into place here: the concepts on previous albums always seemed sketchy or vague, and not entirely connected to the music. That’s not to say that her previous albums weren’t fantastic (quite the opposite), just that the execution never matched the potential. Until now.

Lost Girls is a dream of an album. For one thing, it could not be any more de rigueur – we are living in a fantasia of ‘80s nostalgia, from Stranger Things and IT taking us inside the mind of Stephen King, to the seemingly endless stream of pastiches and homages from The Goldbergs to G.L.O.W. to the upcoming American Horror Story 1984. Music now seems more ‘80s than it ever did back then (or so reliable witnesses attest); see also Vulture’s magnificent article on the best recent songs that sound like they’re ‘80s songs.

Given that we also seem to be facing the prospect of nuclear annihilation at any given moment, and societies across the world are under immense amounts of political pressure and personal strife, it’s as though we’re no longer mythologizing the '80s: we’re living it all over again.

Across the ten songs that comprise Lost Girls, Khan guides you through some serious ‘80s vibes. She recently spoke to Best Fit about the influences behind the album, from Banarama to the E.T. theme, from The Goonies to The Blue Nile. She delivers all of that and more here – she conjures visions of leatherboy vampires hanging from railway bridges; summons the sound of Tears for Fears and the noise of arcades; you can feel the heat of endless summers, see the blinding colours of neon strip lighting, hear the plastic pleasures of Michael Jackson and Prince. She summons the overwhelming joy of childhood friendships, the solitary pleasures of listening The Cure alone in the dark. She makes you long for first loves, proms, David Bowie’s ‘Phil Collins years’, crushes, kisses in the rain, The Psychedelic Furs... Lost Girls, like Stranger Things, is a frighteningly accurate vision of a past that never happened, delivered with sincerity and passion.

“Kids in the Dark” opens the album, and you’re there within seconds. The synth bass prods and pulses while hazier synths add colour and atmosphere around Khan’s instantly recognizable, breathy siren call. Her voice is filled with emotion, as are the ringing Robert Smith-ian guitars. She follows that with “The Hunger”, where the haunting organ sounds and a creeping sense of impending doom evoke Thomas Newman’s score for The Lost Boys, or Lloyd Webber’s The Phantom of the Opera.

The largely wordless “Feel For You” offers some respite from the doom and gloom: it’s more Pet Shop Boys than Pet Sematary, more New Order than Joy Division. But it’s more than just set-dressing – its rhythmic insistency is both entirely necessary and completely welcome. “Desert Man” has a stately, majestic grandeur, and Khan sets her voice free to rise and fall, impassioned and vital. It’s a highlight on an album full of them, particularly due to the way she brings chiming piano notes in to close it out.

“Jasmine” is a leather-clad synth-pop banger, drawing as much from Depeche Mode as Madonna. Khan’s voice is sultry but firm, steely-eyed as she recounts the tale of Jasmine “driving hard” through a “doom gloom haze”. The instrumental “Vampires” follows, fittingly evokes The Cure and Siouxsie and the Banshees, but also showcases the raunchiest saxophone lines you’ve heard in a while.

“So Good” makes good on her promise of Banarama influences, but Khan takes on all of the vocal interplay, her voice echoing through a cloud of reverb haze. The rest of the album is crammed, filled up with inspired sonic choices until the final notes ring out.

“Safe Tonight” is the most straightforward song on the record – one you can imagine making a montage scene worth watching. Can you imagine Molly Ringwald staring pensively out of a window, rain battering against the pains as she remembers a lost love? “Safe Tonight” does just that via music alone. “Peach Sky” and “Mountains” close the album out. The former is sensual and dreamy until some strange backmasked vocals appear to pierce the reverie; the latter is a Chromatics-esque drive down a deserted highway at midnight.

Whether you’ve seen The Lost Boys a hundred times or never before, it doesn’t matter. Whether you’re old enough to have experienced the ‘80s the first time around or not is totally inconsequential. You could think that E.T. and The Goonies are best left in your childhood. You might think that looking to the past to find inspiration is redundant and reductive. None of these things matter – because for the entire duration of Lost Girls, you’re there, right at Natasha Khan’s feet, totally enraptured by her. She gives you everything, expecting nothing in return, lavishing you with luxurious, gothic glamour and saturnine pleasure. A modern masterpiece.