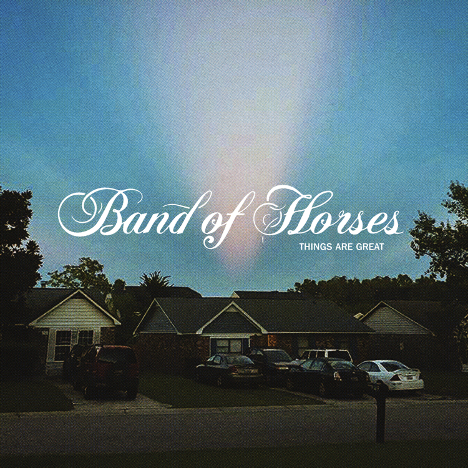 It’s been sixteen years since Band Of Horses released their debut record Everything All The Time, but it’s been what feels like a lifetime since the last Band of Horses LP Why Are You OK, and their particular brand of bruised, defiant indie-country-rock has been sorely missed.

Formed in Seattle but now located down in South Carolina, Band Of Horses has been largely made up of the core trio of Ben Bridwell (lead vocals, guitar, pedal steel, keys), Rob Hampton (guitar, bass) and Creighton Barrett (drums and percussion) - who are here on Things Are Great, supported by Matt Gentling and Ian Monroe on bass and guitar respectively.

From opening track “Warning Signs” right through to the closing “Coalinga”, the band run through what feels like a ‘Greatest Hits’ set, covering all of their strengths and finding very few of their weaknesses along the way. It also helps that those aforementioned tracks are two of the strongest pieces on the album, with the former’s burning rock heaviosity balanced by the latter’s glassy-eyed folk-rock.

Other highlights include the beautifully expansive “Aftermath”, which starts out low and slow before bursting into a dazzling pyre of harmony and melody, and “Ice Night We’re Having” which does many, many things well. “Tragedy of the Commons”, “Lights” and “Crutch” round out the essential selections from the set. Across the album, there are moments of true originality and moments of real emotional power, an approach to album craft that they share with Neil Young and Tom Petty and Bruce Springsteen – and this isn’t accidental, but it also doesn’t seem forced or contrived. It feels organic and spontaneous throughout, which is something a vocal majority of their fans have desired for years.

It could be the long wait between releases acting as a refresher, or it could be that absence makes the heart grow fonder, but this actually feels like the best Band of Horses album in a long time. In fact, it goes to show what an embarrassment of riches their back catalogue is that they’ve spent most of their career being taken for granted. If this were the 70s, they’d be bothering arenas if not stadiums. Things Are Great is certainly a return to their best form, and it shows signs of the band entering a new golden era with the next one. Just hope it’s not another six years in the making.