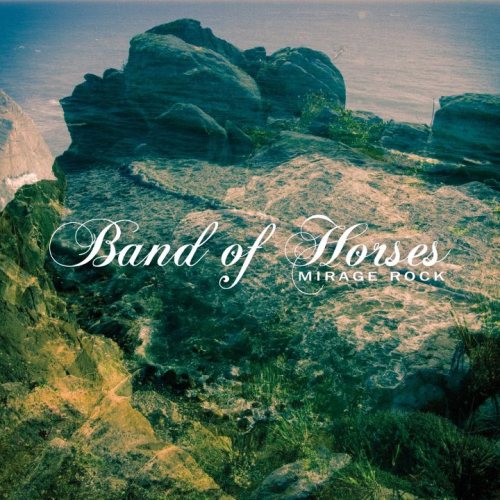 ‘The Funeral’, from Band Of Horses’ debut album Everything All the Time, remains the band’s biggest hit and most well-known song to date, and is a good yardstick by which to measure their progress over a six-year career. Lead singer Ben Bridwell announced his arrival on that song with the line “I’m coming up only to hold you under”, a lyric outlining the intentions of an emotionally suffocating album on which even the hokeyest of sentiments (“I like to think I’m a mess that you’d wear with pride”) sounded painstakingly genuine. ‘The Funeral’ demonstrates the tightrope that Everything All the Time dared to walk, between the mass-appeal of its soaring, effects-laden chorus sounding like it came from (before ending up on) countless Top Gear montages, and its dense and deeply personal lyrical content which actively shunned attempts toward objectivity or universality. This intense intimacy was the perfect counter-weight to the wide-screen stadium rock being peddled by the rest of the Horses.

The story of Band of Horses since then has been the story of that balance being lost. By 2007’s Cease to Begin, Bridwell was only just getting away with the kind of mawkish sentimentality that pocked that album (“no-one is ever gonna love you like I do”), and the grandiosity of Everything was starting to be exchanged for pomposity. Despite the “reboot” ahead of 2010’s Infinite Arms — Bridwell was the only remaining player from Everything by then — not much was done to arrest the slide. Carried away on the success of ‘The Funeral’, Band of Horses seemed desperate to write songs that soundtracked your life, but by losing that personal element, they discarded the thing that made ‘The Funeral’ so compelling in the first place.

That Mirage Rock takes a turn towards the low-key, then, should perhaps come as a relief. The record sees veteran producer/engineer Glyn Johns (most famous for recording Who’s Next) take up the reins behind the desk, and it needs to be said that he performs admirably. Mirage Rock is the most elegant sounding Band of Horses album yet, and Johns oversees them play the most assured and varied music of their career so far. Taking most of their cues from ’70s AOR soft rock, the band sound a world apart from the one that was constantly straining to shoot for the stars on Infinite Arms. Taking the band away from the overkill of effects and reverb that have coloured their weakest moments in the past, Johns gives Mirage Rock a genuine depth of sound and allows Bridwell’s voice — sounding here as strong as it ever has — to take centre-stage for most of the running time.

Sadly, it still sounds like the person least interested in what Ben Bridwell has to say is Ben Bridwell himself. Lyrically he is painting with broader strokes than ever, and entire sections sometimes seem like they’ve been written because he felt a song needed another verse. So often he falls back onto clichés, and the album is riddled with country-rock buzzwords about open roads, sheriffs’ departments, and probably a dead dog or two. Opening track and first single ‘Knock Knock’ is one of the worst offenders — “Knocking on the doorway, look what’s coming your way/It’s every I want, it’s everything I need,” goes the chorus which Bridwell repeats ad nauseum — and regrettably so, as musically it’s one of the record’s more enjoyable moments. A song like that deserves a memorable lyric, especially when its vocal is made so prominent in the mix, but instead we’re given little more than a sedate placeholder.

‘Slow Cruel Hands’ shows at least some imagination, but its narrative somehow comes off as both distant and self-indulgent. “This big city man/I used to rumble with him back in high school”, sings Bridwell, flirting with an interesting tale, but instead just resorting to stock nostalgia with the same effect as, say, taking a sepia-filtered photograph. The sense of disingenuousness permeates the record. Last year’s Decemberists record, The King Is Dead, drove at a similar level of country and ’70s soft-rock pastiche, but managed to do so with both a wry smile and a genuine sense of tribute, a love for the material they were aping. Mirage Rock finds most of the constituent elements in place, but lacks the final push of inspiration to make it anything but a thoroughly unengaging listen.

In the tail-end, Mirage Rock springs into something that resembles life. The stinging ‘Feud’ sounds like Band of Horses of old, Bridwell bitter with emotion as he sings “I want you to fail”. Closing track ‘Heartbreak on the 101’ is a Ryan Adams-alike lament over a slowly strummed electric guitar, and is perhaps the kind of direction the whole record should have gone in.

Post-Infinite Arms, expectations for a new Band of Horses album are already low, so it’s hard for me to call Mirage Rock a disappointment. In as far as I expected anything at all, it has surprised me in being different to what you’d associate with “a Band of Horses record”, and perhaps the band deserve some credit for pushing their boundaries. That, though, is damning with faint praise for a band once so creative and full of life. Mirage Rock is not travesty or an outright disaster, but it is a failure in more places than it is a success.