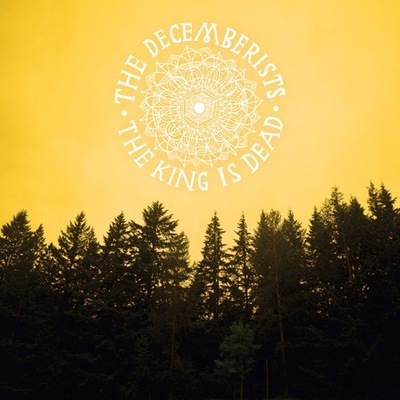 There is a natural, organic element that permeates every facet of The King Is Dead, the brilliant new record from The Decemberists; from the bucolic subject matter of the mostly unadorned, countrified songs, to the serene, placid scene depicted in the album art, right down to the fact that it was recorded in Pendarvis Farm, tucked tranquilly away in a secluded area outside of Portland. But to imply that this new album is a standard, back-to-basics affair is really a discredit to the estimable songwriting talents of frontman Colin Meloy, because even if these songs sound relatively simple and understated (especially when compared to the sprawling prog-rock bombast of their last album, The Hazards Of Love), there is never anything remotely basic about the music that Meloy and the rest of his talented band makes. His erudite lyrics and clever wordplay are still ever-present, just a bit more subdued and restrained this time around, while the stark, forthright melodies are as indelible and catchy as anything the band has ever recorded.

Right from the start, though, there is a clear sense that the band has reached a new chapter in their ever-evolving career, with Meloy imploring us to “Raise a glass to turnings of the season” on the exquisite, harmonica-laden opener ‘Don’t Carry It All.’ So after the band lets “the yoke fall from our shoulders,” they become unburdened by any high-minded concepts that have plagued them recently, and are now free to create their lovely, lilting music without concern for conjecture or criticism. It ultimately proves impossible to not get swept away by the buoyancy of these infectious numbers, and they stand strongly as infallible examples of why people fall in love with music in the first place.

If you notice a distinct R.E.M. flavour colouring a few of these numbers, that is due not only to Meloy tipping his composer’s cap at one of his certifiable influences, but also to the tangible involvement of Mr. Peter Buck himself, who plays guitar on three tracks on the album. So while ‘Calamity Song’ has easily perceptible hints of Fables Of The Reconstruction, and ‘Down By The Water’ has an underlying riff that strongly suggests ‘The One I Love,’ they still are able to soar with the energy of a band that’s only interested in paying rightful tribute to their inspirations, not merely cribbing their sound and style directly. Plus, when you have the charmed opportunity to record with Peter Buck, you’re not really going to ask him to try sounding like someone else, are you?

Gillian Welch also contributes vocals on seven of these tracks, lending a more communal, pastoral sound to songs that were already heavily steeped in both qualities. Her involvement in the chorus of ‘Rise To Me’ gives the song an added depth and emotion, and by the time Colin starts singing directly to his son in the second verse, forget it; the song has simply got you in its sentimental grasp and there’s no chance of getting free. And that is perhaps the most irresistible aspect of the album – the stark, unvarnished emotions imbued in these haunting numbers. There isn’t a far-reaching story to try and keep track of throughout the record, it’s just a matter of you identifying with the universal sentiments found within these songs and letting the feelings that are conjured up lead you where they may.

For who can’t relate to a character that has grown tired of the drudgery of winter and hoped longingly for the warm promise of April, like the crestfallen subject of the glorious ‘January Hymn?’ Even someone who has spent their childhood in snow longs for an eventual change in the weather. And that desired transformation mercifully comes in the companion piece, ‘June Hymn,’ where “you were waking, day was breaking, a panoply of song. And summer comes to Springville.” With that warmth comes a rebirth of sorts, and you can’t help but feel energized by that awakening. But along with that burst of passion and overwhelming sense of vitality often comes a bit of strife, which is touched on with ‘This Is Why We Fight,’ a clear, prescient look at how loving someone or something so much eventually clouds our desires to the point where inexorable mistakes are often made.

The album winds down with the soothing lullaby ‘Dear Avery,’ where enough time has passed since the aforementioned quarrel that you can only hope that hearing your desperate plea is enough to cause your love to come home to you. It’s a gorgeous finish, with an understated piano line and stellar slide-guitar work, bringing the conflicting, wearisome emotions of the album full-circle, like a calendar on the wall inevitably leading us to the start of another year, whether we’re ready to let go and move on, or not. And the sublime majesty of The King Is Dead is not something you will want to let go of anytime soon, as the spirit and strength of the album lingers with you long after a new king is surely crowned.