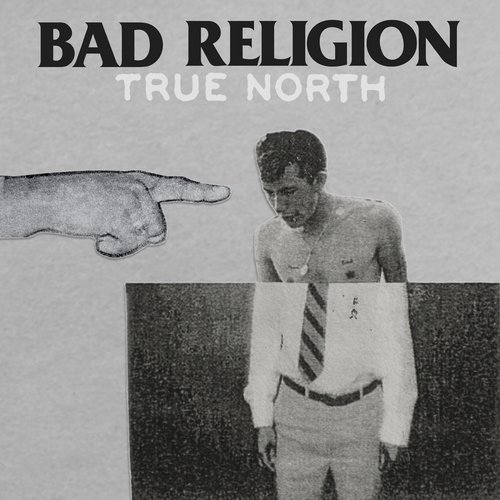 When it comes to the punk rock old guard, bands don’t really come any more revered, or established, than Bad Religion. True North, their sixteenth studio effort, arrives at the dawn of the band’s thirty-third year, with the original lineup, despite all manner of reshuffles down the decades, three-quarters intact, with their only consistent member, frontman Greg Graffin, continuing to lead the charge.

Graffin is surely the most overqualified man in punk – he has a PhD in Zoology and combines band duties with a position as a Professor of Life Sciences at Cornell University – and you expect lyrical intelligence to stem from such an overtly academic background; indeed, his sharp, world-weary songwriting style has long been a key component of the Bad Religion arsenal. True North finds him on typically astute form. The Bad Religion approach to politics and global affairs has long been noteworthy for exercising a little more restraint and delivering a more finessed message than many of their contemporaries, drawing on a wide range of dissatisfactions to deliver their ideology in a manner thought-provoking enough to vindicate the step down from the sort of raw aggression typical of politically-charged punk outfits. ‘Robin Hood in Reverse’ and ‘Land of Endless Greed’ tackle the never-more-relevant themes of corporate avarice and governmental irresponsibility, but it’s the more humane themes on True North that are the most faithful to the band’s outlook; ‘Dept. of False Hope’, with its anthemic refrain of “Hold your head up, forgotten man”, and ‘Fuck You’, sympathetic with everyman’s desperation in the face of adversity, prove that Graffin is at his most lyrically incisive when aligning himself with the cause of the common people.

Musically, we more or less know what to expect from Bad Religion nowadays. Whilst, lyrically, there’s certainly some outliers in the back catalogue – 2000′s The New America, for instance, saw a move towards personal, rather than political, themes – the band’s recorded output has stuck pretty vehemently with their tried-and-true formula of furiously fast punk rock. The group’s rhythm section, as always, provides a solid base for simple but incendiary guitar work, but as with the band’s lyricism, their distinguishing feature, sonically, comes courtesy of Graffin; his delivery is much more nuanced than many of his contemporaries, with the focus much more often on melody than mayhem, with the band’s signature three-part harmonies – or “oozin’ aahs” as they’ve labelled them in the past – also prevalent throughout.

As such a good facsimile of a classic Bad Religion record, though, True North wouldn’t be complete without some filler; at thirty-five minutes, it’s certainly not overlong, but it mightn’t have been a bad idea to have excised a couple of tracks that perhaps don’t quite manage to keep pace with the rest of the record. ‘Hello, Cruel World’ sees a jarring drop in tempo, and the album would be no worse off without the rushed-sounding ‘Dharma and the Bomb’ and ‘My Head Is Full of Ghosts’.

At over three decades in the business, originality might no longer reign in the world of Bad Religion, but reliability and accessibility certainly do – True North is another solid addition to a formidable canon.