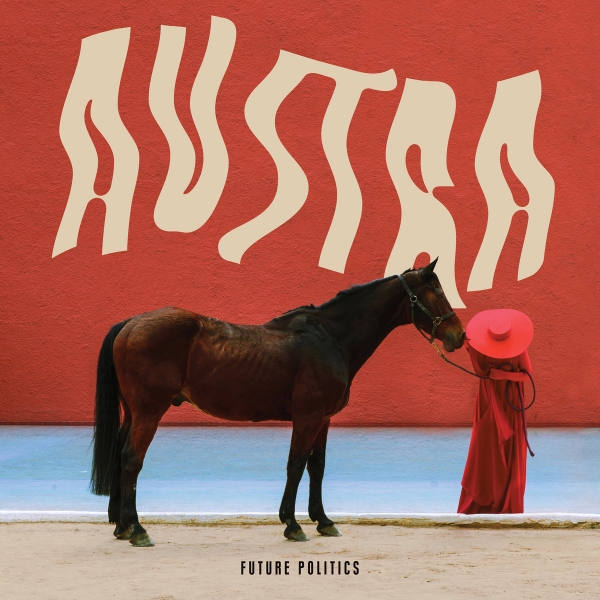 It’s an odd sensation, beginning a new calendar year with the unshakeable and creeping expectation that Things Can Only Get Worse. What happens when history appears not as a progressive trajectory of reason and enlightenment, but a drunkenly undulating misadventure led by greed, power, and exploitation? What do you do when the future turns out to be pretty shit?

Austra have decided that there's only one way: Future Politics. It’s their third studio album following debut Feel It Break – which grew on us back in 2011 – and 2013’s Olympia. Frontwoman Katie Stelmanis, who produced and engineered the record at her home in Montreal, told us in December that her travels between Canada and Mexico City, her investigation of economic and philosophical texts and her ruminations on modern capitalism all inspired her to “keep exploring and imagining ideas for the future as a way out of the current apocalyptic doom path we are currently on”.

The embodiment of this struggle is Revolution Rhonda, the character who appears in the cover art and video for "Utopia", swathed in red and visiting from the future to guide us. The result is another record that provides ample room for the elaborate unfurling of Stelmanis’ talents as a vocalist, her altitudinous range the billowing banner of a call to arms.

De rigeur comparisons with the Nordic noir-pop of The Knife and, more recently, Highasakite, find gleeful gratification in opener "We Were Alive". In the chill dawn, with Stelmanis’ shivering falsetto breaking on the horizon, this life seems like an unbearably sweet impossibility: 'What if we were alive? / It’s like we were alive'. It's the introduction to an often rudimentary but affecting electronic opera of the eternal grievances of alienation ('My work is valid / I can't prove it but I know' sings Stelmanis on "Utopia"), subjugation, and isolation, amidst which a love story plays out between Stelmanis and the messianic Rhonda. Her lyrics are both lament and relief, exhortation and inspiration, and while the dazzling white fascist utopia grows upwards and outwards around them, she and her scarlet double draw closer in the barking beats of "I Love You More Than You Love Yourself", the communion almost too raw, too piercing.

"I’m a Monster" is a highlight, beginning with Stelmanis hitting preposterous and brittle high notes before being sucked in by a shadowy pulse and rambunctious little drumbeat, to confront her own emptiness: “I don’t feel nothing anymore” she laments. So too are "Angel In Your Eye", which found John Grant’s "Sensitive New Age Guy" buried in a time capsule in 2113 and decided to glam itself up in a wavy, ecstatic homage, and "Beyond a Mortal", a track of mellifluous poise and rhythm, of shifting keys, which flatlines and serenely reboots itself. Whatever their intentions, the overriding impulsion is of Austra's Future Politics as a micropolitics - of love, of subversions and antagonisms, of instantaneity - and a reminder that revolution doesn't just happen in the streets, but at home, in the most intimate of spaces.