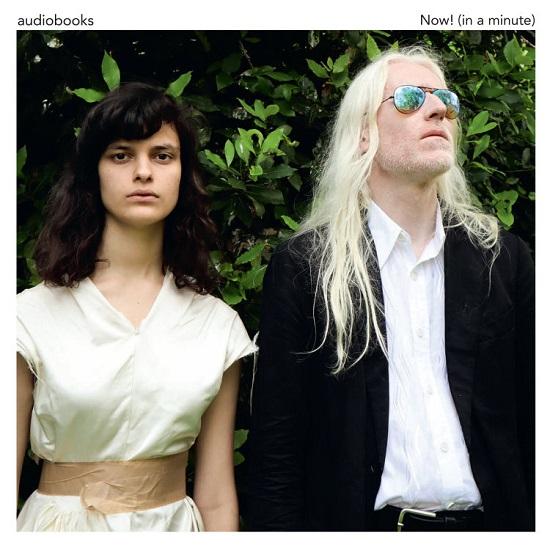 I guess it’d be a real bummer if a band called Audiobooks didn’t have a decent backstory.

A month after Welsh producer/mixer/engineer David Wrench moved to London, he met 21 year old Evangeline Ling at a mutual friend's party. At the time, Ling had been obsessively tapping out strange stories into her phone, fragments too short to be put to print. Instead, David suggested they try them to music. It took a day for the odd couple to start work, and tracks formed within hours of each other. Ling's second trip to David's studio was marked by her turning up in Batman pyjamas – the only clean clothes she had available – having been left sleepless by coursing inspiration.

And so came Audiobooks and their debut LP Now! (In a Minute), the product of this intense collaboration between an art student and a producer whose credits include Let's Eat Grandma and Zun Zun Egui. The results are expectedly bonkers, with some of Ling’s tales ushered into songs and others scored by improvisations, the collection bound by a deeply English eccentricity and a shared love of pop music's spikier edges.

Half of the record is dedicated to concrete hits, of which recent single "Hot Salt" is a choice example - a sort of "Don't You Want Me Baby" if that track had more sitar and made less sense. This is one of the few places where Wrench's shy vocal pops up – a strange and beautiful counterpoint to Ling's whooping sing-talk. "Dance Your Life Away", too, makes good on its nominal promise. The three minutes of clattering percussion and throbbing disco funk features Ling hollering about getting waxed, a fittingly bizarre stab at a Friday night serenade. And somewhere between dancefloor and bedroom, there's vocoder-smooth "It Get Be So Swansea" and shuffling lullaby "Mother Hen", the latter's lofi drum machine and bubbling synths recalling the best of Broadcast.

Slid between these tightly-wound pop tunes are the album's non-songs, much closer in kind to performance art. Here, Wrench turns to electronic noodling and Ling's staging of her off-beat tales takes the floor. If this description conjures a feverish fear-of-pretension in your chest, a hard ditto. But there's something about Ling's use of language, coupled with Wrench's virtuosity in the live room, which makes these peculiar tracks mesmerising.

On "Grandma Jimmy", for example, Ling narrates a family's mid-summer trip to Devon, the visceral detail scored by a lazy, guitar-laden groove supplied by Wrench. In her description of a claustrophobic car journey with the title's drunken matriarch, Ling is genuinely hilarious, showcasing an affected Home Counties slur as she documents dangerous driving and the tuna sandwiches melting under the car-sick dog's belly.

"Call of Duty Free" is also a riot; the tale of tragic teenage lovers Austria and Lewis Lane and their ill-advised plan to take a holiday abroad, under which Wrench builds a snarling bed of discordant synths. Ling's embodiment of her characters lifts each track to charm and unsettle in tandem – whether pitched down and crooning as Austria's creepy boyfriend, or nasal through the airport lounge’s imagined speakers, directing said boyfriend to Gate 666.

On the whole, Now! (In a Minute) is wildly entertaining. From delightfully wonky dancefloor fillers to tangled electronics, Wrench’s seasoned production skills pay off again and again. Audiobooks also manage to play (and it does feel like play) with deeply human themes like coming of age, familial dysfunction and young love without ever losing their undeniable mystique. Like an odd but enviably-dressed couple you might spot on public transport, their connection is palpable, and you can’t help but desire to know more – maybe everything – about them. This is clearly the start of something very, very special.