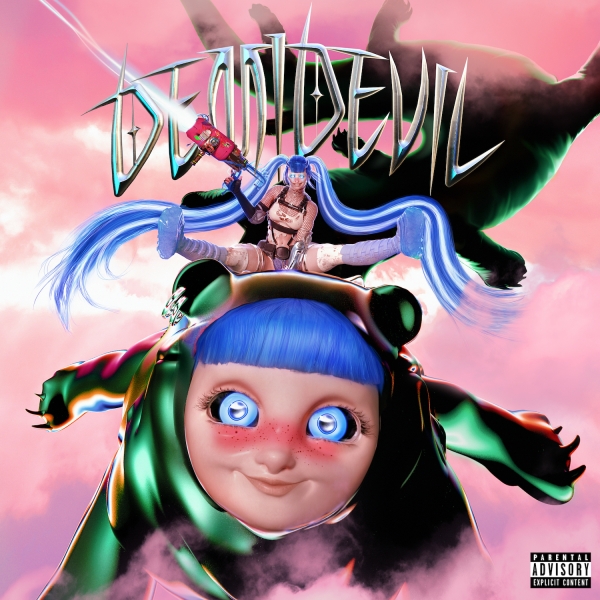 There’s a lot of pressure in dropping your debut collection proper, and Ashnikko appears to have drawn the short end of the stick.

Having initially pushed back the release of her ten track mixtape Demidevil from November last year to 2021, a mix up meant that fans who had pre-ordered the vinyl received it far before the official release date, to which the London-based North Carolina-born rapper made her frustration succinctly clear on Twitter.

Dragging the release forwards is a perfect example of Ashnikko’s headstrong and unapologetic approach to her music, overall vision and image, her singular appearance bouncing between high fashion cyber goth and Harajuku e-girl hyperreal anime muse. Her recent “Daisy” remix featuring iconic moe character Hatsune Miku makes perfect sense as soon as you clock her iconic blue do. Establishing herself with TikTok smash “Stupid” featuring Yung Baby Tate, Ashnikko’s songs flit from darkly confrontational to sneering barbs (think “Working Bitch”) with a blink of an eye. This ethos has continued with great aplomb on Demidevil, which again sees Ashnikko revel in her playfully acerbic humour, but also explores friendships and the emotional vulnerability behind her facade.

“Being a bitch is my kink”, Ashnikko quips on aforementioned self-empowerment anthem “Daisy”, the moody hip hop and chunky beat setting the tone of what is to come with its swift interjections and enticingly sweet chorus; why be either when you can be both? “Toxic” similarly opines on underwhelming relationships and glory hunters clinging to the coattails of her success whilst latest single “Deal With It” - complete with a wailing sample of Kelis’ “Caught Out Here” - is a bold and poppy anthem fit to reign on radio. The Gen Z twists on Demidevil are inspired enough to win over those who lived them the first time around, with “L8r Boi” riding the resurgence of pop punk and reimagining Avril Lavigne’s anti-girl narrative as a tale of a softboi caretaker who’s decided enough is enough. In the era of accounts such as @beammeupsoftboi, this is a fun bit of poetry.

Ashnikko doesn’t shy away from celebrating the female form in its multitudes with the sex-positive '00s inspired R&B of Princess Nokia-featuring bisexual thirst trap “Slumber Party”, good-time bop “Drunk With My Friends” and the cutesy whip-smart frustration of witty culmination “Clitoris! The Musical”. As 24-year-old herself recently put it, she “just likes being a little demon – a little devil hellraiser" in the face of the male gaze, but it’s a crying shame that dynamic punch of “Tantrum” failed to make the cut.

It’s easier to spurn attention when someone is in the midst of withdrawing it from you however, and the Halsey-esque cloud hop of “Good While It Lasted” shows that, underneath all her bravado, Ashnikko is just as pained as the rest of us when exposed: one listen to the raw vocal rasp of the lead Grimes duet “Cry” confesses as much. Leading this era, the opening lyrics of the track say it all: “I’m a tough bitch, but I’m sensitive”. Alas.