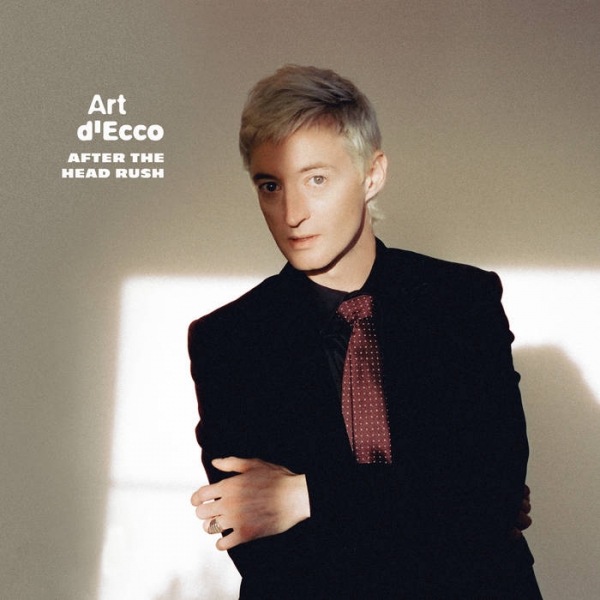 Indie sleaze is well and truly back.

While Instagram accounts are flicking through dusty photographs of the early ‘00s, Art d’Ecco is manifesting the kind of indie which stood pigeon-toed in the ’80s and is lobbing it into this chaotically modern world for a taste of nostalgia.

The Canadian songwriter, through three previous albums (2016's Day Fevers, 2018's Trespassers, 2021's In Standard Definition), has established himself with an appetite for entertainment in the most glam of fashions. Embracing the adrogyny of the weird and wonderful artists that make up this world on his previous outings, d'Ecco's move to short, cropped and blonde hair signals something more determined – a controlled environment to deliver us a tonic for these trying times.

After The Head Rush is also made to be big, big, big! Flourishes of sax ripping through the four-on-the-floor sound, synths manifesting with the grace of a poltergeist on halloween, it’s all made for the highest impact. The shimmering opening of "Palm Slave" trickles down as the pace quickens, and it's in this toe-tapping groove that Art d’Ecco sits, effortlessly gliding through whispered to top-range vocals. It's difficult to resist the darkened dancefloor it conjures; the sounds, sights and smells of sticky clubs that are more likely to play Ziggy Stardust than anything by Disclosure.

Given the record is born out of wanting to be the upper-fuelled high after both last years In Standard Definition and a forced retreat back to d’Ecco’s hometown during the pandemic, there’s an unstructure to the album that feels like the high wears off the longer it plays out. "Run Away" and "SAD Light Disco" are both comendable numbers delivering their own sense of purpose but intentional or not, the sugar rush of “Only Ones”’s clandestine bombast or “Until The Sun Comes Up”'s party-hard message is seldom seen.

But all this aside, Art d’Ecco is the kind of artist who’s able to find the past, package it in familiar sounds and tones, all without providing a sense of facsimile or redundant pastiche. Instead he brings a genuine homage; digging into the names of Bowie, The Cure et al to find the source and repurpose it for a new world on a come down harder than any Glastonbury weekend, with After The Head Rush the prescribed hair-of-the-dog.