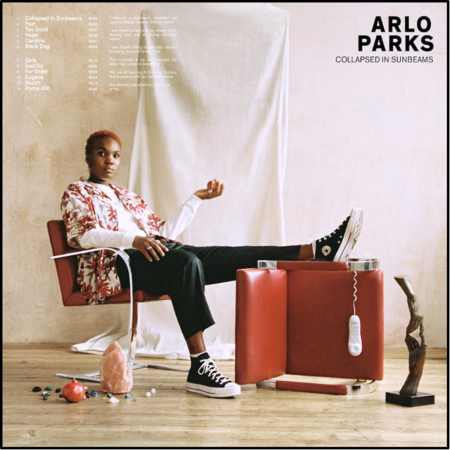 West London singer songwriter Arlo Parks’ ethereal voice, layered over poignant lyrics and lo-fi backing tracks is the [perfect antidote] to this wicked world we live in. After the release of her debut single “Cola” in 2018, Parks has continued to impress with her smooth and sultry music, with each new offering feeling more like poetry set to melody; her music is filled with ambiance, elegance and emotion.

On her full-length debut, Parks carries a unique tenderness. Each track on Collapsed In Sunbeams feels perfectly crafted and formed, built to entice whilst still subtly carrying the album’s general themes. To quote the closing track “Portra 400” Parks debut album is “making rainbows out of something painful.”

Becoming apparent quickly is the fact the brilliance of it all lies in the mundanity of her lyricism - her poetic depictions of everyday scenarios make her songs easily relatable. By not over romanticising or emoting her songs she surprisingly manages to create an endless depth. Take her single “Black Dog” – a song about dealing with everyday depression. The lyrics “let’s go to the corner store and buy some fruit / I would do anything to get you out your room.” The simple imagery is exacerbated by the heaviness of the song’s context: it transports the listener into a world of understanding and relatability through the simple but effective 'less is more' mantra.

Opening the album is the tranquil “Collapsed In Sunbeams”, where the spoken word flows poetic as Parks gently introduces listeners to what's to come. It’s a tranquil start to the album and broaches the intimate themes with a gentle hug – “you shouldn’t be afraid to cry in front of me” she reassures.

In fact, all throughout the opening moments comes a 'light at the end of the tunnel' thinking. Tracks “Hurt” and “Hope” preach the mantras of “it won’t hurt so much forever” and “you’re not alone like you think you are / we all have scars” respectively. However, “Caroline” seems to be the album’s turning point. Parks creates a vivid storyline of a couple she observes whilst “waiting for the bus one day”. The desperation of the track falls in complete contrast to the previously motivating and upbeat album tracks. “Caroline” is perhaps the most beautifully, and tragically, poetic of the album’s 12 tracks. A similarly sad love story is narrated on “Eugene”. Written as a love letter to her best friend, the sense of intimacy makes it feel as if the listener is there with Parks as she observes these.

The blending of the genres throughout the album appears with ease. “Too Good” holds a funk bass line with a juicy R&B melody over the top, offering a delicious contrast to the sleek, dark and sultry “For Violet”. On the other hand, Parks gifts listeners with the smooth, almost reggae-like beat of “Bluish” with its intricate electronic and jazz layers - not content with giving solace to a world shrouded in darkness, Parks is also effortlessly fusing genres.