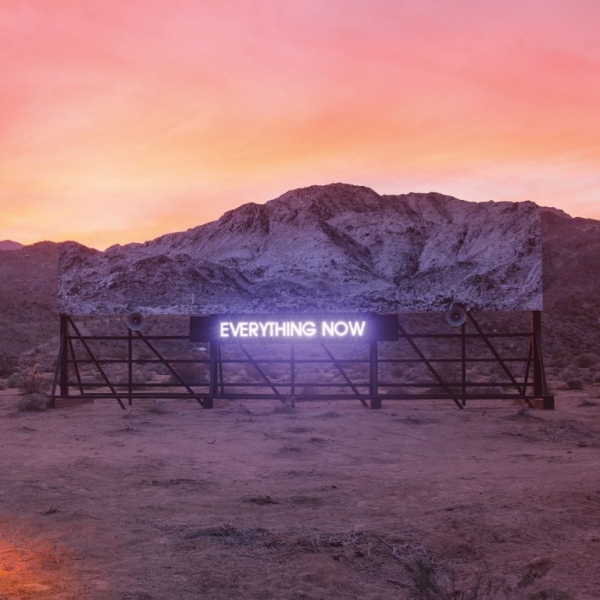 Arcade Fire have always been one of a kind.

On debut album Funeral the band took the heartache and numbness of loss, and with it they fuelled universal anthems in a way no one else can match. On Neon Bible they carved out their escape through a post-modern culture lost in its own contradictions. The Suburbs saw the band looking back, nostalgia and mistrust mixing together in heartwarming resolve to forge something brighter, while Reflektor firmly faced the here and now, a shimmering cry through society's echo chamber.

So, almost four years on, where do Canada's brightest export go from there? Everywhere, that's where. Promoting their latest record through the marketing of condoms, cigarettes, and slow cookers (to name but a few items), advertising partnerships with car dealerships, bantering with international corporations, and announcing highly exclusive subscription offers, before we even get to the record we're questioning how much of what we see and what we take in is actually real - a question all the more pertinent in the instant society we find ourselves in.

At first glance, it doesn't look like we're going to get any answers. In its very construction, Arcade Fire's fifth album is an advert for everything you yearn to hold dear. Struggling with the day to day? "Creature Comfort" offers relief on a platter. Tired of feeling alone? You need a bit of "Chemistry". Don't want to leave your youth behind? "Peter Pan" can give you a taste of immortality. Not sure what it is that you crave? Take "Everything Now" and feel "Infinite[ly] Content". There's a whole world outside, but whatever it is you're searching for, now you can find it at your fingertips.

As with everything Arcade Fire do, there's more to this album than the shimmering neon allure that radiates from the cover. Lead single "Everything Now" presents yearning emotion at its most basic and all encompassing. Win Butler's vocals sit front and centre, their understated delivery making the ever-present craving of the song all the more human. Boasting emphatic piano melodies, the slamming of speakers breaking, and the most anthemic pygmy flute solo you're ever likely to hear, it's a track that's as vibrant and expansive as the campaign that surrounds it. Then there's the resounding crowd sing-a-long that ushers the track to a close: recorded during the band's headline set at Voodoo Festival last year, it draws you into a place where everything is as possible as it is implausible.

This is the world that Arcade Fire have created with Everything Now. Alight with possibility and misadventure, it's an album that's as textured and varied as the world that surrounds it. Clap-a-long refrains, chant along chorus hooks, and stuttering melodies all shine at the forefront, drawing you deeper and deeper into the complex realities of the pipe dreams and fantasies that flood the surface.

"Creature Comfort" takes this to a euphoric high. Spiralling through blind hope and self-destructive deprecation with one of their most addictively danceable numbers yet, this is the hunger for more at its most perilously human and its most broken. With it's brass stab infused swagger, "Chemistry" basks in the elation "Creature Comfort" strives so hard to attain. Heavily distorted refrains and a festival primed clap-a-long all revel in exactly what it is to feel good in the moment, whatever the cost. "Infinite Content" takes this to its natural conclusion, rapidfire refrains followed by a relaxed reprise equally content in being entirely spent.

If the first part of the record is grasping on to the allure of everything, the second is the desperation of seeing it all pass by. "Put Your Money On Me" showcases the band at their sleekest and most sincere. A ballad of rising dependancy, it shimmers and sparkles with every ounce of the hope it strives to preserve. "Electric Blue" might be the one of the group's most disco offerings to date, but meandering through its own melancholy, the heartache it presents is as infectious as the sing-a-long refrains that flood the choruses.

Whatever it is you crave, chances are you'll find a taste of it here. Whether forging an escape or a space for reality to hit home, Everything Now is a celebration of, well, everything. As cynical as it is whimsical, with their fifth album Arcade Fire have bridged the gap between actuality and aspiration. What's holding you back from doing the same?