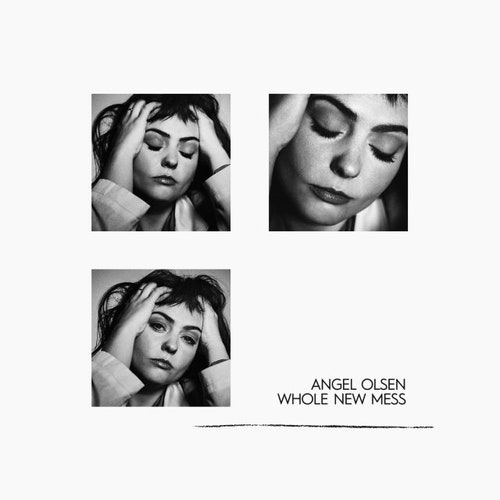 Whole New Mess is Angel Olsen’s fifth full-length and a quick follow-up to last year’s All Mirrors, but it’s actually a prequel to that album.

The story behind All Mirrors was that it was a skeletal break-up record that Olsen wrote as a processing mechanism, which was then blown up to arena-size with the help of co-writerr Ben Babitt, producer John Congleton, arranger Jherek Bischoff and a 12-piece orchestra. Now, a year on, we’re getting to hear the stripped-back originals.

For those who were unsure about Olsen’s orchestral evolution on All Mirrors and yearned for a return of the more raw styling of her first two records, Whole New Mess may well be exactly what they desired. But, for the majority who were knocked out by All Mirrors, it’s hard to hear these acoustic versions of the songs without immediately comparing them to the ones we’ve been living with for a year. This is a barrier that some will find more worthwhile to overcome than others, but if you’re willing to invest the time then there is a wealth of subtle differences in emotion to be plumbed on this album, even if the words are exactly the same.

The Whole New Mess versions are closer and truer to the pain that they were borne out of, and for that reason the songs that are more explicit in their dejection and heartbreak fare the best. “Summer”, here renamed “(Summer Song)”, is one stunning example, the omission of the original’s ice-cool beat allowing more space for the quiver in Olsen’s fragile soul to really be heard. “Tonight (Without You)” is another where Olsen is alone with her guitar, and the simplicity suits the broken-down lonesomeness of the lyrics so perfectly that this is one instance where the stripped-back version actually blocks out the memory of the other.

There are some instances, however, where these minimalistic versions just can’t escape the shadow of what came before. This is most notable on “Lark Song”, which, without the electrifying undulation of “Lark”, can’t come close to the original’s high drama. This is also true of “Chance (Forever Love)”, where you’re always just waiting for that cinematic wash of silver strings to sweep you off your feet – but it never comes.

For the most part though, the songwriting is strong enough that the different versions can go toe to toe and end up both being on your essential Angel Olsen playlist. The former album’s title track is the best example of this; as colossal as the maximalist sheen of “All Mirrors” was, the new version, “(We Are All Mirrors)”, is also a classic – startling in its stark use of organ and minimal overdubbed vocals to create a cloaked and heavy atmosphere.

There are two songs on Whole New Mess that are completely new to listeners. One is the title track, which kicks off the album with Olsen promising to make the necessary changes in order to move on. The other is “Waving, Smiling”, which, although it sits at the middle of the album, essentially bookends this era as it finds Olsen coming out of the fog and looking forward to a brighter tomorrow. It’s the perfect way to draw a line under this period of her life and artistry, and it’s exciting for listeners to hear her looking ahead too; with these two albums she’s proven the vast range of her songwriting, and that she could go just about anywhere with what she does next.