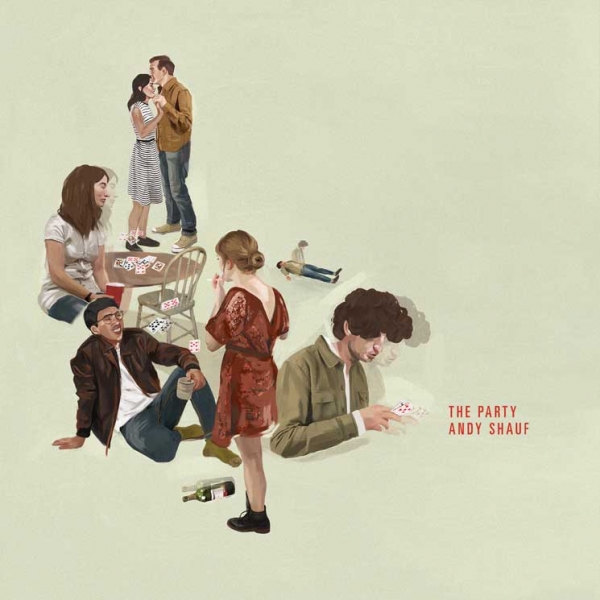 It was of some surprise to learn that the third record from Canadian crooner Andy Shauf was to be based on a party. It seemed misfitting, given the artist’s sombre style, and the concept in general a little clichéd.

But then, Shauf has always had a way of portraying characters and telling their stories in the most delicate and piercing ways. In last year’s The Bearer of Bad News, he vignetted a collection of ominous, unfortunate folks living a cold, small-town life. In his latest effort Shauf takes the same patchwork-style narrative style and places it confidently in the more confined context of a room at a party, capturing glimpses of conversations and inner thoughts throughout the course of the evening.  In “Quite Like You”, the singer is a little too honest as he slags off Jimmy, his close (and very stoned) friend to his ex-girlfriend, while in “Eyes of them All” the focus turns to the girl dancing alone, the heartwarming chorus mirroring the attention she receives.

Shauf’s instrumentation and composition is at his strongest here too. Opening wonder “The Magician” - with its mesmerising, ‘down the rabbit hole’-style video from Winston Hacking - sets the bar high harking back to Sgt. Pepper’s... style psychedelic/baroque late-60s pop, a style that’s revisited later in “The Worst in You”. Recording most of the instruments himself again, Shauf’s penchant for clarinet and strings remains intact; it gives it a classy and timeless feel, as with the string harmonies on “Early to the Party”.

Whilst a connection is often made to his influence Elliott Smith, Shauf’s Saskatchewan voice is smoother round the edges, and in The Party he uses it as an instrument with his childlike “do-do-do-do”s in songs such as “Twist Your Ankle” and “The Magician”. Indeed, the overall tone of the record is generally more innocent and upbeat than Bearer, making the darker moments of reflection all the more pronounced. These moments come as the party draws to a close; in penultimate track “Alexander All Alone”, Shauf dons the electric guitar and with palm-muted strokes and a repeated single piano note creates the most suspenseful track of the record. In the chorus he sings “If hell is found inside of me / Then open me up and spill me out”, capturing the most introspective and existential thoughts at the end of the night.

Closer “Martha Sways” is at once beautiful and tinged with sadness; its sleepy, stripped-back style indicates the end of the evening as the rest of the revellers head home or slump in stupor. The last guest is left with Martha, who is to him a ghost of the past, filling a space of longing: “Martha sways, and I follow suit / She fills my glass, and I toss it back / Into the space that once held you / Dance, dance to the radio / While the devil takes control”.

With this effort Shauf successfully portrays the complicated smogarsbord that is youth by capturing in its crudest form at a party, with its hedonism and heartbreak, and in doing so propels himself miles ahead of his singer-songwriter peers who have tried to do the same.