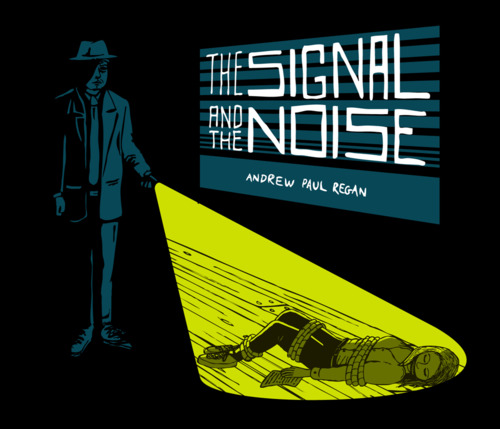 Andrew Paul Regan was formerly the man behind the solo poptronic outfit known as Pagan Wanderer Lu. If you instantly caught on to the anagram linking the two names, then you likely also realised that Regan’s music is about as catchy, enjoyable or meaningful as rearranging letters to form a band name. In short, it’s cute in spurts and forgettable on the whole.

The Signal and the Noise is the latest longplayer from the Cardiff resident and the first using his real name, but Regan’s been at this since the turn of the millennium. A simple pop quirkiness abounds on every track and therein lies the strongest draw for fans of Regan. However it’s hard to take in large doses, especially when it borders on silliness like on album opener ‘John Frum Will Return’.

Regan’s simplicity leaves the mix too open at times, and the melodies and vocal work aren’t strong enough to sustain the interest in the album’s weakest moments. ‘Omniscient Narrator’ and ‘Checker Charley’ suffer from this fate. ‘Mistakes Our Parents Made’ warrants a comparison to some Andrew Bird outtake, but the track’s not that interesting.

The best tracks arrive when Regan abbreviates his work into concise melodic statements that run under three minutes. ‘One Time Pad’ plays like a lost Placebo tune and it’s among the album’s darker moments. ‘Infinite Babies’ immediately follows and it builds a melancholic pop sweetness à la The Weepies.

A middling affair, The Signal And The Noise suffers from its lack of insistence. Not only does it fail to move in any specific direction, but any hint of mood that it shows can be outdone by other artists. Simply put, fans will find other albums if they feel like something summery, cute, whimsical or serene. Unfortunately, a final track marked with intensity toward the album’s end, ‘The Good Old Days,’ comes too late in the sequence to change the listener’s mind or offer proof to the contrary.