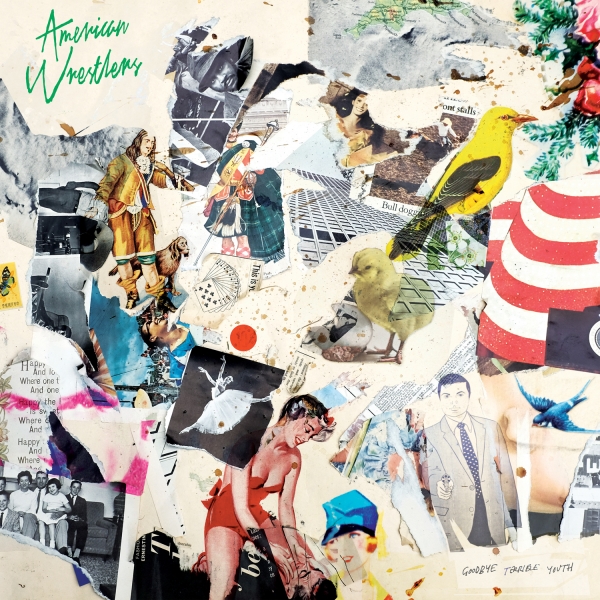 Contrary to F. Scott Fitzgerald’s most commonly misconstrued quote, there are in fact second acts in American lives. That goes for American Wrestlers’ lives, too.

Trading Manchester for Middle America in the name of love, songwriter Gary McClure found himself in St. Louis, Missouri, a few years ago, following his departure from experimental alt-rock band Working For A Nuclear Free City. St. Louis was perhaps not the most likely locale from which to reboot a musical career, coming from a place where the crucial music history is a bit more recent. Still, McClure took to Tascam and found his way on to Fat Possum, who gave American Wrestlers’ initially self-released debut the official treatment it deserved.

McClure has now made another swap: that of the charm of home recording for the possibilities of a full indie rock band. Goodbye Terrible Youth features Bridgette Imperial, his wife, on keyboards, Josh Van Hoorebeke from Everything Went Black on drums, and Ian Reitz on bass. His songs are still built on cloudy day melodies and articulate, sympathetic lyrics, but the new wiry momentum is a jolt. It’s like the quiet, sensitive kid came back from summer vacation with ripped arms.

Listening to Goodbye Terrible Youth hurdle forward one big, eager hook after another, is reminiscent of a breakthrough album by another Gary: Snow Patrol's Final Straw. Comparatively speaking, "Amazing Grace" is the sweet "Chocolate" center, but there’s no soggy power ballad weighing down the middle otherwise. Whatever you think of where Gary Lightbody went creatively afterward, between Final Straw and the second Reindeer Section record he had hit his stride; much like McClure is clearly on a roll here. Second acts may be just the beginning.

Songs like “Give Up”, “So Long”, “Terrible Youth” – all of them, really, there are only nine – are fuzzed out and unfussy, but not just simple pleasures. They kick in the door but then make themselves welcome for a long stay.