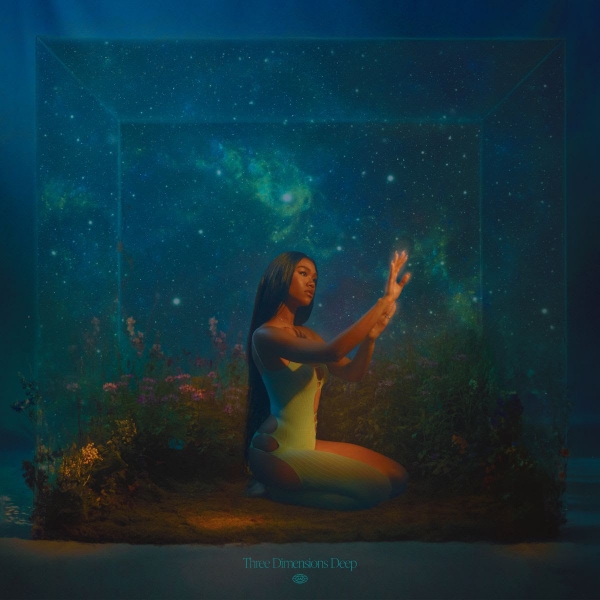 We’ve all heard the phrase ‘time is the best healer’, but how true is it? Well, if ever there was a case study to prove that statement true, it’s Amber Mark’s long awaited debut album Three Dimensions Deep.

Almost four years after the release of her second EP Conexão, where singer-songwriter Mark established her favoured form of therapy – creative flow — she's delivering a concept album of self-discovery. Divided into three segments: Part 1: Without, Part 2: Withheld and Part 3: Within — each explores Mark’s journey through insecurity; forced confidence; and finding her place within the world, respectively.

Album opener “One” is a juxtaposition in it’s finest form. Lyrics that form the story of Amber Mark’s imposter syndrome and career anxiety are contrasted with an earworm of ridiculously rhythmic basslines, glints of sparkly synths and triumphant horn section choruses. A song dedicated to her late mother, Mark’s poignant lyricism has the ability to send shivers to anyone, as she sings “And I don’t know if I’ll ever succeed / I just want you proud of me up above”.

Moving through her mixed emotions, Mark captures the feelings of forced confidence in “Bubbles”, as she searches for escapism through trashy nights out to numb the pain of heartbreak. Laid back R&B fits the bill, as syncopated pulsations are at the core of the track, sensationally partnered with Mark’s rich contralo hums to create a sound that is ready made for the exact environment she sings about. And just like a concept album should, she seems to replicate this kind of night out in the near future, with a cooler head. “FOMO” is a neo-soul wonderland that sees Amber Mark truly release herself from anxieties that have been holding her back, as she chants “Won’t miss out on living / I believe it’s about time / I’m gon’ lose control / No time for FOMO”.

Part three of the album presents itself through the bittersweet dimension of “On & On”. Mark reveals her confusion of the world around her, as she questions “I’ve never been so confused / My confidence won’t come through” between fragments of iridescent keys and elegant strings. In contrast, her musical versatility shines through in “Darkside”, as she goes from R&B and soul to a track that delves into her exploration of astronomy with a sound that mimics essences of Phil Collins and Prince.

With stand out soulful single “Worth It” joining in the latter part of the album, it becomes even more delicate. Mark sumptuously unpacks how we are all our own worst enemy through self-destruction which is transformed into a message of self-love and a personal mantra to herself, as she hooks “You think you don’t deserve it / But you are so damn worth it”.

Three Dimensions Deep is an album that has helped Amber Mark to recover and find peace within herself. Yet somehow, it has potential to lend itself to anyone’s personal challenges, defining Mark as a force to be reckoned with.