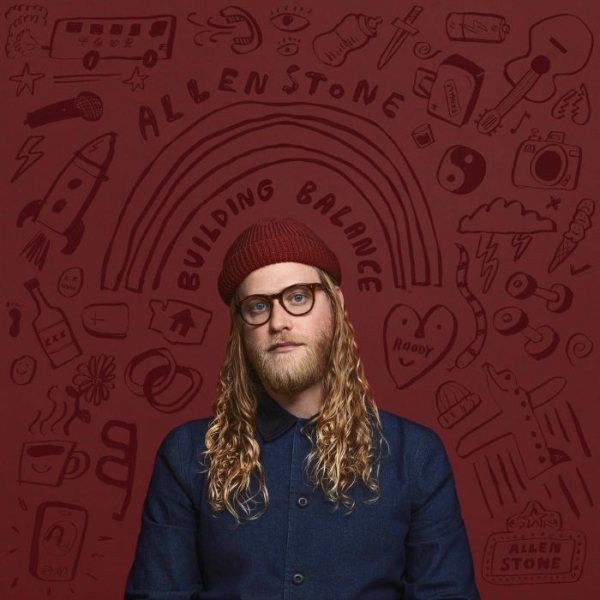 From being adored by Lionel Richie to having Justin Bieber’s co-sign, Allen Stone’s Building Balance justifies his position as one of the most exciting and individual musicians in America.

Chances are, if you're from the UK, you might not have heard of Allen Stone. In contrast, the iron-lunged soul-singer has established himself as a household name across the Atlantic. Driven by the popularity of his breakout single, "Unaware", Stone's wholesome demeanour has taken him up through the highs of working with idols like Darly Hall and John Mayer down to the lows of asking his major label to drop him after he felt he was losing grip of his art. Now back with ATO Records, Stone has compiled his greatest album yet: Building Balance.

Without paying attention you could easily mistake singles "Taste Of You" and "Brown Eyed Lover" for radio-friendly pop. That's what makes all four of Stone's albums such an interesting journey. Now ten years into his career, he's perfected the art of disguising neo-soul and modern R&B as accessible and family-friendly funk pop. Under the hood there's an eclectic artist capable of blending genres and experimenting with instrumentation to meld the greatest sounds of the '80s, '90s and modern era.

While his debut album, Last to Speak, demonstrated an artist who hadn't hit his stride yet, his sophomore self-titled album showcased an artist creating sounds no one else was thinking of at the time. The rawness and weight of songs like "Satisfaction" and "Celebrate Tonight" morphed into a more polished and accessible sound on Radius. Lyrically, Stone started to engage with themes more directly—tackling problems within the music industry on "Fake Future" and afforded opportunities on "American Privilege". On Building Balance, Stone has opened up to a personal intimacy, inspired by the family he started over the past five years.

Single "Give You Blue" is dedicated to Stone's wife, an almost four-minute ballad where his silky folseto contemplates the various ways he can demonstrate his love. The production moves swiftly between Prince-inspired drum beats and harmonies, and more modern bass grooves you'd find on a Robyn record. The following track, "Look Outside" sticks to this tempo and gives Stone an opportunity to exercise his dynamic vocal range backed up by an arrangement you can picture Erykah Badu going to town on.

Outside of these songs, Stone is giving a masterclass in modern soul. Growing up in the church gave him an expert ear for tone and musicality. “It’s been a relatively uphill battle for me because of the way I look,” he told Rip Nicholson's blog in 2015. His long curly hair, big goofy smile and white skin have made him somewhat of an anomaly in his genre. The belting voice that comes out his mouth is the last thing you'd expect from looking at him. Nevertheless, songs like "Back To The Swing" show his breadth as an artist as he blends Stevie Wonder big band sound with a vocal delivery that you could picture Jack White screaming down a distorted microphone.

The slow and sexy "Sunny Days" is one of the coolest songs to come out this year. Experimenting with a melodic rap delivery in the verses and a powerhouse pop chorus, Stone could fit in just as well with Gary Clark Jr. as he would Ty Dolla $ign. While moments of songs like "Sweater" and "Warriors" do bleed more into the people-pleasing pop sound that Stone is sometimes confused with, it is still executed with enough conviction to make this entire album an addictive listen that you will want to leave on repeat all day.