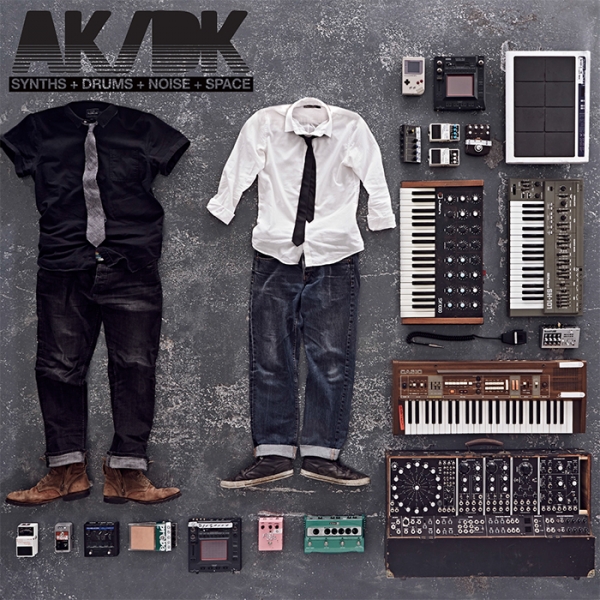 By switching curly ‘c’s for kicking ‘k’s and guitars for synthesizers, AK/DK deliver an eleven-track collection that (like their almost-namesakes) offers chaos and creation, yet with a few more moments of calm than Angus and co are known for. As with High Voltage and Let There Be Rock, Synths + Drums + Noise + Space does what it says on the tin. Made up from a multitude of electronic drips and tricks, with organic drums playing alongside the keys, AK/DK’s debut provides the noise, with space for progression, collaboration and interpretation.

When you learn that AK/DK’s first gig together (organised by krautrock legend and ex-Can member Damo Suziki) was an entire unrehearsed, improvised, hour-long series of beats and beeps in various guises, the album makes a lot more sense. The influence of those European pioneers is clear on Synths +… ”Maxwell’s Vibes” is pure synthetic orchestration surrounded by beaten skins; when you also learn that both halves of the duo (Ed Chivers and Graham Sowerby) sit behind drum kits on stage, with vintage technology surrounding them, the vision for this project is an 8-bit, organic version of crystal clear. Loops like Kraftwerk open “Maxwell’s Waves”, following Hütter and co.’s lead of making the plain sound pioneering, before beating it with, erm, beats. As guitars and sharper effects are added into the mix, the final minute encourages comparisons with The Prodigy too.

A juddery loop (slightly leftfield of Moroder) also opens “How To Hide Yourself”, which builds in a similar way, yet sounds even more Kraftwerkian – but only if a classic rock drum kit had traded places with the robots’ drum machine. “Random Resonant Arp Disco” and “C-Beams” follow similar drugged-up disco, dance-friendly patterns, with the former reminiscent of Metronomy’s frequent forays into electronic instrumentals and the latter showcasing the duo at their most harmoniously hectic. It’s the track where the drums – and particularly the cymbals – are given permission to overpower the keys, and it’s a confirmation that they don’t take lightly.

The “Space” is provided with tracks that other electronic acts may not have been able to produce. “Autoservice” opens like a digital daybreak and builds into hazy-half flashbacks and half-dream like lullabies; it’s playful outro and unorthodox “behind the scene” sound effects highlight the band’s ability at improvising, and how they ride a soundwave for as long as it feels right. ““It’s funny because… this lead isn’t working either. ” Can be heard towards the end of the fumbling, when in fact it’s funny because honest, imperfect moments like this are often what we’re dying to hear from an artist, and is why superfans are often so quick to pick up ‘demo version’ featuring Special Editions. It’s the difference between an act making music with machines and manufactured music making machines. “Morning Dragpipe” is equally chilled and hazy, while closer “Seq And You Shall Find” acts as the opposite of “Autoservice”, turning the world into dusk.

Of all the tracks, it may be “Modulator” that shows the LP’s title at its most literal, and the duo at their most leftfield. With beat breaks for arcade-like melodies and still synths for military drums, it’s certainly high voltage, but is the sound of an act declaring “Let There Be Krautrock”. Random? Yes. Radio friendly? Possibly not; but it’s Electronic + Organic + Loud + Imperfect, and it’s one of the most exciting releases of the year.