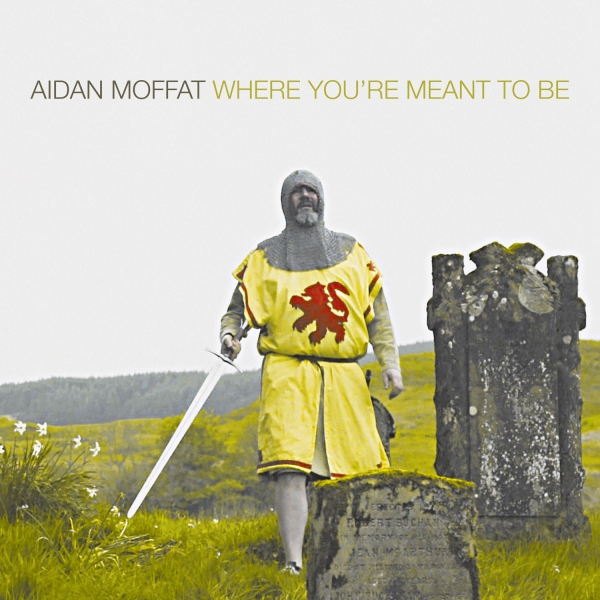 An appropriate if unconventional torchbearer for his native land’s musical lineage, Aidan Moffat toured Scotland in 2014 in connection with the Commonwealth Games. The resulting film, Where You’re Meant To Be, will be screened at the end of this Month through early April across many of the towns and halls in which it was shot, and this live album of the same name can regale all who are unable to attend.

“I normally do sad songs, this is an unusually cheerful set for me”, notes the unofficial Poet Laureate of Glasgow’s pheromone-and-ale-sotted id to scattered laughter from around the room at the village hall in Drumnadrochit, a stone’s throw from Nessie’s lair. Moffat’s mission was to bring the lyrics of traditional Scottish folk songs into the twenty-first century, dragging them in from the countryside to city streets without tearing them from their roots. The former Arab Strap singer has lost none of his flair for the ribald over the years, and thus feels compelled to preface his audience before going into songs like “I’m a Rover” and “Big Kilmarnock Bunnet” that “it’s important that everybody understands that this isn’t me.”

Along for the journey is a band led by Moffat’s previous collaborator Stevie Jones and includes members of electro-art-pop duo Bdy_Prts and James Graham from The Twilight Sad. Graham’s voice, resonant and heartfelt whether he’s singing about the sad fate of a Taliban-fighting “Jock McGraw” or salacious misadventures in a bygone era’s Blythswood Square, turns out to be an ideal counterweight to Moffat’s distinctly dry, low range. Most touching is the set’s climax, “The Parting Song”, which brings puking neds and breaking hearts into the original’s already complicated origins. Every time the chorus circles back to “Let’s drink and be merry/All grief to refrain/For we may or may never all meet here again”, the sentiment feels genuine and you wish you were there in that little village hall that night to join in with everyone.

Where You’re Meant To Be conveys the coziness of the room without any tricks or much polish, just a balance among the performers and enough proximity to the audience to capture bits of individual voices here and there. The instrumentation for each song is according to its need; no fiddle, accordion, piano, or thumping drum outdoes the others. Moffat even relies on voice alone a few times: presenting a reluctant orgy-goer in the encore, “The Ball of Kirriemuir”, as well as “I’m a Working Man” and the title song.

“Where You’re Meant To Be” borrows the same tune as “Betsy Belle”, which can be found on Belle Stewart’s Queen Among the Heather. Stewart’s daughter, the highly regarded traditional singer Sheila Stewart, played an unexpectedly significant role in the direction this project took before she passed away at the end of 2014, which is an aspect of the film that (for understandable reasons) doesn’t carry over to this record. The song recounts an accidental pub crawl that Moffat and Graham once found themselves on. The first bar has decent karaoke but the place is filthy, another is clean but the fancy cocktails are too expensive, and so on.

Finally, they head to their regular, where the people and the jukebox are all right: “And so that’s now where we are/We’re standing swaying by the bar/Catching eyes full of grog and glee/Jimmy gets a round and pays/Raises a pint and proudly says/’You always come to where you’re meant to be’.” The song is not only one of the few whose lyrics (well, at least half of them) would be acceptable to recite among polite company, but also demonstrates how rousing folk melodies can draw out the affectionate side of the dissecting gaze Moffat has long focused on the less savory side of life in his hometown.