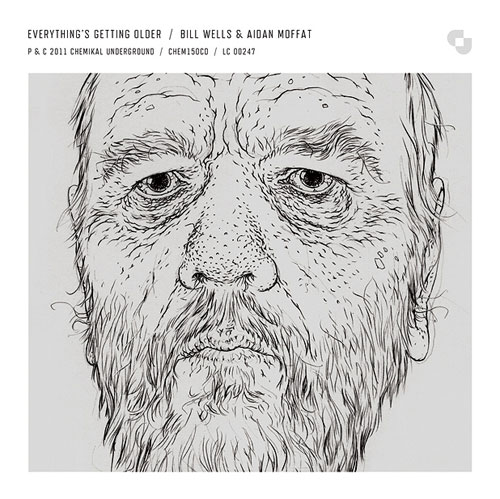 Apart from the obvious platitude made clear in the title it is a strikingly fitting one for Aidan Moffat and Bill Wells whose careers are now nearing their third decade. And although they stand at a great distance from their musical youth, their collective experience radiates from every note of every song on this album. With Moffat and Wells together the pair achieve a brilliantly exotic yet bleak record with quirky avant-garde asides, moments of profound sadness, some drunken silliness, Glaswegian pathetic fallacy, remote ugliness and snippets of bliss all tied up in narrative packages that treat each subject with a humble reverence and restraint. Although as glum as the scenes he paints there’s a corrosive beauty in his tales, an admiring and appreciative nature, that posits the old adage ‘everything must fade’. Of course this special beauty found in Everything’s Getting Older rests uneasily with contemporary notions that we must fight the clock and stay young at all costs, but its a permanent and never fading truth that must be told, and it takes a man as colourful as Moffat to tell the tale.

‘The Copper Top’ is the albums heart. Its a paean to fading. It speaks of the slow and unflinching movement of time and our closeness to death, which can be uncomfortable but when done with the candid openness of Moffat it just feels right. Likewise Wells conveys everything through the same filtered lens allowing both the music and the lyrics to bleed in to each other creating a whirlpool of dense, decaying sound.

Many times throughout the album I’m reminded of that old English musical adventurer Robert Wyatt and his own avant-garde style. Especially when the beat picks up and Moffat becomes more melodic. It seems to share the same ramshackle, savant style. Tracks like ‘Glasgow Jubilee’ and first single ‘(If You) Keep Me In Your Heart’ are propelled forward by these verisimilitudes of Wyatt; not copies but following a shared blueprint. Both artists seem to create energy from falling apart, or indeed from the breaking down or breaking apart of their musical inheritance.

‘Glasgow Jubilee’, to go back to it for one second, is a unequivocal success. It’s ugly and its lyrics ring through with this ugliness. However when the whole thing is moving and Moffat is pouring on the condensed layers of description a magic hangs heavy in the air. Lines come thick and fast and the whole track could easily be quoted verbatim but its a testament to Moffat’s writing ability that he gives the last, dying words to a prostitute who cries out, “we could all be dead tomorrow.”

‘On The Greatest Story Ever Told’ Moffat and Wells play around with a euphoric, echoing big-beat drum sound to melancholic piano chords. Within this brittle shell Moffat plays on a hook of great inventiveness as he waxes on existential themes. Piecing together the core ideas intrinsic to the album and the stories told within he weaves a thread through copulation, sperm, the movement of the near celestial bodies, to distant stars and galaxies and eventually to man’s greatest achievement, the thing that separates us from everything else, the greatest story ever told, that is, love.

With ‘And So We Must Rest’ acting as both the sonic and narrative denouement of this album it reminds us of everything we have heard over the last twelve tracks and the enchanting mystery and beauty of the world we have just entered. It is the final resting place of a narrative that has taken us through the dying world of the past and its eternal infliction. Time will never stay still, it will never let anything just be. It is always moving forward, and Moffat and Wells stand intimate to this achingly beautiful idea.