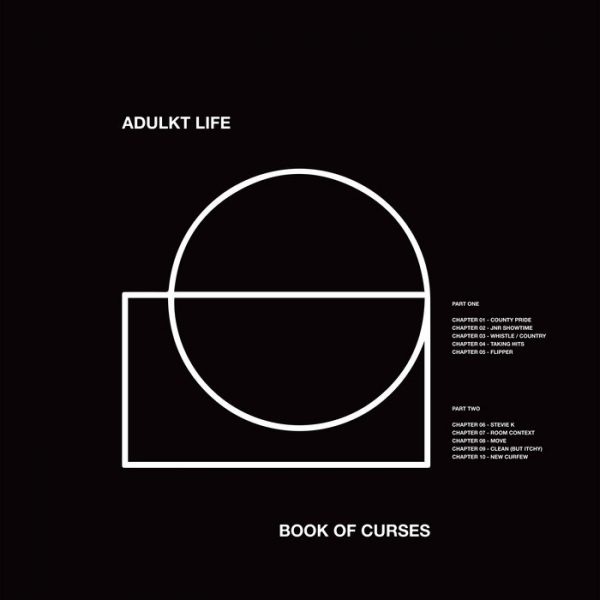 Born from a chance meeting in a Rough Trade store in London, Adulkt Life are flipping out rather than remaining flippant on their debut album Book Of Curses. Formed of Chris Rowley (Huggy Bear), John Arthur Webb (Male Bonding), Kevin Hendrick and Sonny Barrett, the band have channelled their collective punk energy - and minor aspirations to sound like Devo - into a striking collection of aural vexations.

Since leaving his former outfit Huggy Bear who were prominent on the UK riot grrrl scene in the early '90s, Rowley hadn’t felt the need to play in a band. His meeting with Webb however, sparked a mutual excitement at the possibility of creating music again. Now signed to What’s Your Rupture?, Adulkt Life are shaking up the cynics with their abrasive guitar riffs and scathing lyricism.

Opener “County Pride” is a sardonic, swirling attempt to overcome the frustrations of living in a small town, followed by the deep anguish of “JNR Showtime”. Rowley, who is a 55-year-old father and employee of a children’s charity, addresses child abuse on this track with righteous disgust. “Son to a father, you’re a father to a son / Why would you let this shit carry on?” he snarls, ending the track with the rattled admission “I don’t wanna do that again.” Pummelling drums and riotous riffs permeate “Whistle Country”, while “Taking Hits” is a grungy cacophony that tries to give a voice to the voiceless.

Guided by a strong moral compass, Adulkt Life ricochets between themes of small-mindedness and social inequality while simultaneously paying homage to their 90s musical roots. Rowley describes the strung out “Flipper” as a “city hymn” and a nod to the influential noise-rock band of the same name, while the aural uppercut “Stevie K” is an ode to Nation of Ulysses guitarist Steve Kroner, who galvanized the sound and attitude of Rowley’s former band back in the '90s.

What melds these two elements together on Book Of Curses is the urgency, the pure unadulterated need to be a part of something - to get shit done. The brief “Move” epitomises this, pushing listeners to seize the opportunity to make a difference, whether that’s making music, going out on protests, or simply engaging with people who are trying to get the shit done - just like Adulkt Life.