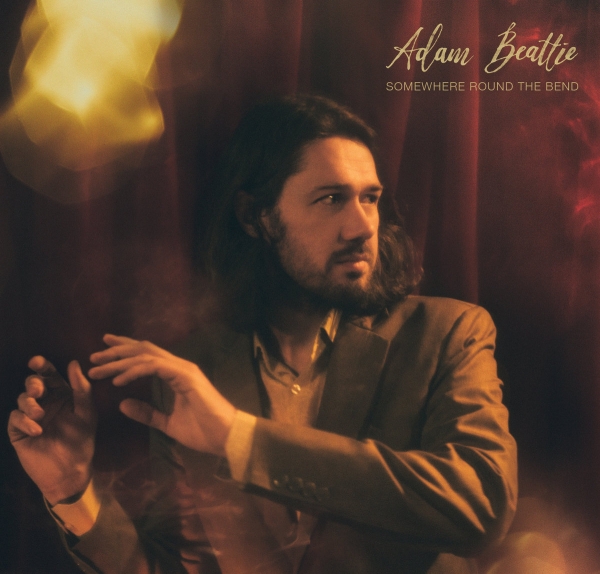 The fifth solo album in an enduring seventeen-year career, Somewhere Round The Bend is an example of the Aberdeenshire-hailing troubadour at his most varied, without diluting the central constitution of his own sound.

In a timeline punctuated by a series of collaborative projects, such as Rough Trade-signed PicaPica, as well as membership of Scottish collective Band of Burns, Adam Beattie intrepidly ventures forth through a twelve-track affair that is in part boosted by shared songwriting credits with Lewis Capaldi and Billie Marten collaborator Fiona Bevan.

Primed by a title-track resembling a spaghetti western staple in its Morricone-esque arrangements, Beattie is swift in drawing upon a broad palette of influences to furnish a metaphor for unconstrained, borderless wandering. Fading between genre traditions with a deft of touch in this sense, conventions are cross-pollinated with the singer-songwriter’s own guiding vernacular, an approach that works without truly lapsing into well-worn inclinations. Familiar tropes are borrowed in gentle acknowledgement, subtle allusions to the album’s governing themes rendered with light cadence rather than excessive overtones.

Memories of European tour stints, for instance, are evoked in the carousing, polka-plied pep of “Grottammare”, namechecking the now defunct Italian music festival in celebrating an itinerance that has all since dissipated. The lilting Celtic notes of “A Thousand Roads”, lounge bar ambience of “Sickle Red Moon” and the country-tilting “Bad Man” further delineate an interfusion of styles; environments summoned that embrace with a warmth of character, proving difficult to resist.

Beattie’s crooning drawl paired with rustic acoustic comfort represents the auditory equivalent of a flickering hearthside in a deep chill, an atmosphere that frames musing reflection on loss; misty-eyed fondness that avoids lurching into the overtly maudlin. Somewhere Round The Bend doesn’t reinvent the wheel, but its disparate, at times stirring folk balladry does prove a pertinent soundtrack to colder months, one that champions the indomitable nature of the human spirit in the face of existential hardship - capping a year undoubtedly defined by such.