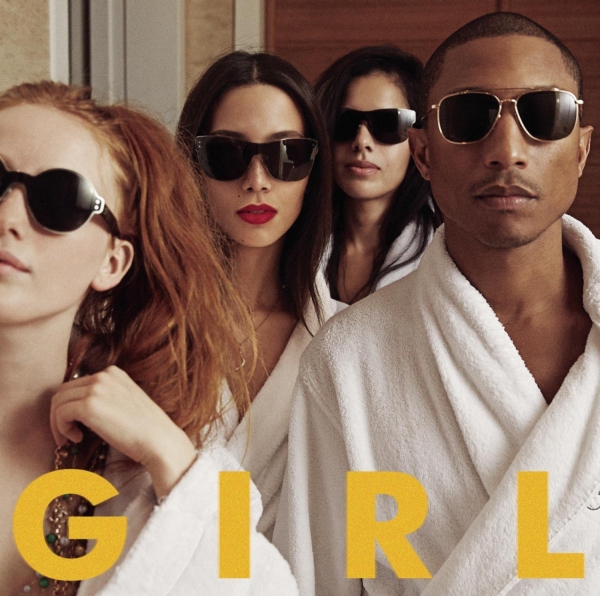 The commercial resurrection of Pharrell Williams after a career lull has been swift and spectacular. His involvement in three number one hits last year (Daft Punk’s “Get Lucky”, “Blurred Lines” by Robin Thicke and his own dose of musical Prozac, “Happy”) has put him onto the very top perch of pop. While progressive R&B artists such as Frank Ocean and Janelle Monáe have taken their cue from Pharrell and kept on innovating, Pharrell’s career upward trajectory has coincided with him producing the least challenging work of his career.

That’s not to say G I R L is a failure – far from it – but let’s take a step back here and remember a Pharrell before he was appropriated by robots. As one half of production duo (alongside Chad Hugo) The Neptunes, he has given life to Nelly’s “Hot In Herre”, ODB’s “Got Your Money”, Snoop’s “Drop it Like it’s Hot”, “Milkshake” by Kelis, Britney’s “I’m A Slave 4 u”, Justin Timberlake’s “Rock Your Body” and an unbelievably long list of game changing R&B tracks too long to note here. The first word spoken on G I R L is “Different” – different in this case doesn’t mean better, but instead of getting a thrilling bunch of skeletal R&B with electronic squelches, we get a really strong Justin Timberlake album sung by Pharrell.

G I R L continues the approach used on the hits of last year by concentrating on his inviting Curtis Mayfield influenced falsetto, there’s no trace of the hip hop styling’s that made his 2006 solo debut In My Mind such a drag. Instead, there’s a disco vibe throughout, but it’s also informed by Philly soul, with continual musical acknowledgements of Michael Jackson’s Off The Wall, Dirty Mind era Prince, Timberlake’s Justified and the back catalogue of Chic. So yeah – it’s pure pop.

So onto that title, apparently named to fix some of the mess caused by his involvement Thicke’s “Blurred Lines”, expertly described by Trica Romano of The Daily Beast as “kinda rapey”. This is Pharrell’s love letter to women, which in itself could be classed as being pretty sexist (the post-coital album sleeve shows that because he’s Pharrell, he can get three girls in the tub, just like that). Whilst his involvement on Thicke’s track could be classed as that of an innocent bystander, it was still Pharrell who sung about “Getting some” before raising his cup to the stars on the atrocious dad-disco of “Get Lucky”.

At least on the scintillating “Gush” (and no, he leaves us in no doubt about what’s gushing), he asks permission before promising to “Light that ass on fire”, a track which contains the swooning strings of composer Hans Zimmer, and Nile Rodgers playing an interpretation of the guitar riff nobody even needs to describe – it’s sheer perfection. The trick is repeated on the equally impressive “Gust of Wind”, on which the majesty of the music can’t even be ruined by the annoying robo-vocals of the track’s other featured guests, Daft Punk (although they try their best).

Timberlake himself appears on “Brand New”, a brass-led, uplifting funk track. On paper, this looks fantastic, but when you have two falsettos vying for attention, the end result comes across a little two first time mothers cooing over each other’s new born, as a concept lovely, bit a little too high pitched for any kind of ear pleasure. ”Marilyn Monroe” comes from the same book and is much more satisfying, with dramatic plucks of string and an impassioned ‘women are great’ lyric from Williams: “I put my arms around her, and I promise not to abuse you, since now I found you, why the hell would I want to lose you?” – it’s overly an overly earnest message, but with a hook that it’s impossible to resist.

Elsewhere you get perennial clothes forgetter Miley Cyrus duetting on the cheeky but disposable “Come Get it Bae” and Alicia Keys turning up to do Alicia Keys stuff on pro-empowerment “Know Who You Are”. But it’s not all retro soul on G I R L - the ‘go to’ track here is the unintentionally hilarious “Hunter”. A sizzling rock track that references “Kiss” by Prince in its sleek minimalism and occasional use of bass, it has the cocksure attitude of Saturday Night Fever era Bee Gees. Written from the perspective of a woman on the prowl, the lyrics are clunky “My love is callin’, sex is calling”, etc but the real master stroke here is when Pharrell raps as if he’s the female predator. It’s as gloriously rudimentary as Debbie Harry’s rap on Blondie’s “Rapture” and follows what little flow she had on that track line for line, but instead of praise for Fab Five Freddy, we’ve got “Taxidermy is on my walls, with the full description of the killer ‘coz I’m a hunter, cupid, thank you for what you did, but you can’t aim and get what I get, I’m a hunter”. It’s unexpected, camp, stupid and brilliant.

If a long playing ode to the wonder of women was the driving concept behind G I R L, then of course, Williams has failed. If however, you want to hear an artist at the height of his popularity who’s all up in this place for a good time, then grab a hand and raise a cup (if you must), this G I R L will keep you entertained throughout.