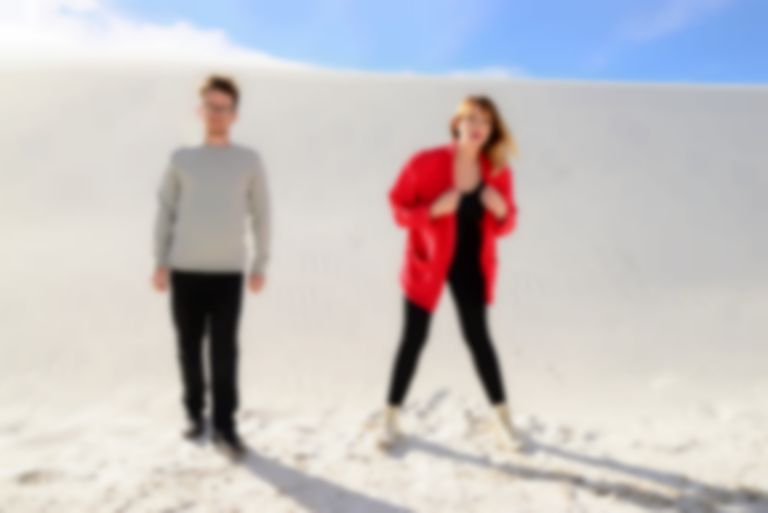 Wye Oak (aka Jenn Wasner and Andy Stack) have shared "Lifer", another magnificent taste of forthcoming LP The Louder I Call, The Faster It Runs.

The new tune links up with the album's title track and its follow up "It Was Not Natural" to tease Wye Oak's next record. As well as the song itself and an accompanying lyric video, the band have shared a letter written by Wasner detailing how it came about:

For some people, it is much harder to stay alive than it is for others.

The basic cruelty of this fact has been with me - hovering at the edges of my consciousness, often threatening to take over - for pretty much as long as I can remember. For each auspicious turn that my life has taken, I’ve always been conscious of how easily I could have ended up in a different situation, of how many things had to line up perfectly in my favor for me to be sitting here, writing to you. Sure, I work hard, and I’m moderately talented - but a lot of people do, and are. When you look at the facts in a broader context, it’s impossible to deny the reality that I’ve been very, very lucky.

Addiction, depression, and mental illness run in my family. I’m an anxious person, but my particular psychological weight is manageable, bearable - certainly not all-consuming or life-threatening. That’s genetic luck.I dropped out of college to play music when I was 20, and somehow the very first thing I made (with the person who is still my main collaborator and creative partner) got heard and released by the record label we’re still working with, over 10 years later. That’s luck, too.

To be a creative, sensitive person is to be aware of the world around you - in an immediate sense, and in a global sense. Injustice is everywhere. Suffering is the norm for the vast majority of people on the planet. Throughout my life, this reality reflected itself to me from great distances, in the lives of strangers, and in the experiences of the people closest to me. And yet, while I watched those around me suffer, some invisible force seemed to have settled around me, protecting me from the same fate and dropping gifts of good fortune unceremoniously into my lap. I was always the lucky one. And along the way, my brain took a feeling that should have manifested as something like extreme gratitude and turned it into overwhelming, soul-twisting guilt.

I am an idealist, and a perfectionist - a tricky combination. From the deepest place inside of me, I believe that all people are deserving of equal happiness, and that a person’s self-worth is not determined by their ability to work or make money or hit any of the major checkpoints for success that our society has deemed acceptable. We all know that the world is not a perfect place, or anything even remotely approaching fair. And my first instinct when faced with something flawed is not to fix it, or to figure out some kind of compromise - my first instinct is to destroy it. Burn it down. So my attempts to align my internal beliefs with my behavior - to not play along with the shallow ambition and achievement-based value system that we’ve put into place for ourselves - has often manifested in my life as unintentional self-sabotage.

I wrote this song after a long conversation with a friend - someone who loves me and wants to see me succeed, and let go of this burden of guilt that I’ve been dragging around for my whole life. While I wrote it, I was thinking about the people in my life who have had to struggle much harder than I do, or likely ever will - just to stay alive. For a moment, I saw everything differently than I ever had before - I was able to accept and be grateful for the gifts I had been given. I was able to forgive myself for having so much more than so many others. And I made a deal in my mind with those others: If you can keep trying to choose life, and find joy, in the face of all of these obstacles, well, then, so can I. This song contains that promise. It’s called 'Lifer'. I hope you like it.

Wye Oak are set to play a lengthy run of live dates over the coming months, including three in the UK in May. Find out the full plans.