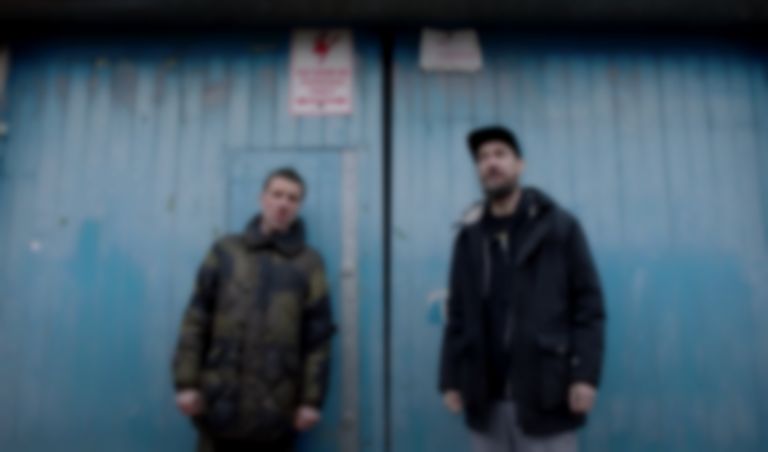 Sleaford Mods have teamed up with Amyl and The Sniffers' Amy Taylor for their new single "Nudge It", which lands as the third preview of their upcoming album Spare Ribs.

Sleaford Mods' Jason Williamson says of the new track, "Imagine you’ve got limited options, unsure how you’re getting by that week, looking out the window of the damp flat you don’t want to live in, and seeing a bunch of posers having a photo shoot because ‘cool architecture bro', we feel your pain."

He adds, "Reduced circumstance isn’t a pantomime. If you haven’t lived within its confines don’t use it to enamour your ideas. It confuses the platform for those that truly live it and more often than not buries creative breakthroughs because the arena is polluted by the view of their world through someone else’s privileged lens. So beware the eager networkers, don’t settle for the 20p pay-out, nudge it, pop the posers. And don’t apologise for the fucker either."

"Nudge It" marks Taylor's second collaboration in two months, after featuring on Viagra Boys' cover of John Prine's "In Spite Of Ourselves" last month.

Williamson adds of the album, "Our lives are expendable under most governments, secondary under a system of monetary rule. We are stock if you like, parts on a shelf for the purposes of profit, discarded at any moment if fabricated or non-fabricated crisis threatens productivity. This is constant, obviously and notably in the current pandemic. The masses cannot be present in the minds of ill-fitting leaders, surely? Or else the realisation of their catastrophic management would cripple their minds. Much like the human body can still survive without a full set of ribs we are all 'spare ribs’, preservation for capitalism, through ignorance and remote rule, available for parts."

He says the album title emerged from "the idea of the amount of people that died from the first wave of coronavirus; human lives are always expendable to the elites… We’re in a constant state of being spare ribs."

"Nudge It" featuring Amy Taylor is out now. Sleaford Mods' Spare Ribs album will arrive 15 January 2021 via Rough Trade, and is available to pre-order now.