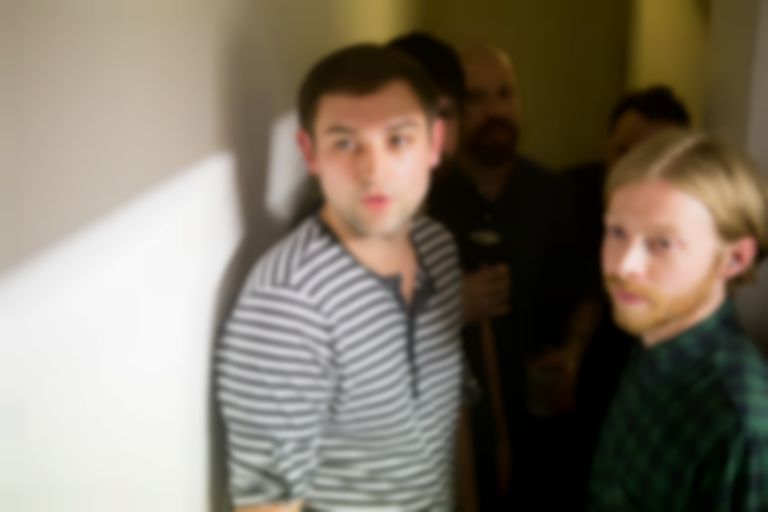 The Twilight Sad are sharing new track "The Airport", a mighty tune left regretfully by the wayside last year.

The track is taken from the sessions that eventually made up astonishingly dark recent album Nobody Wants To Be Here and Nobody Wants To Leave, which we gave 8.5/10, saying that "this isn't an album for the weekend gloomster. No no, this is for full-timers. The Twilight Sad have nurtured their sound into one that, in comparison, would make Radiohead's “Street Spirit” sound like the feel good anthem of the summer, and The Smith's “Heaven Knows I'm Miserable Now” apt backing music for a Zumba class. If that's not an achievement, then nothing else is."

"The Airport" reverberated through strung-out corridors and lairs scorched by the morning light; there's regret gleaned in darkwave guitars, and as James Graham croons as if thorns line his gullet, there's a sense that everything's slipping from The Twilight Sad's fingers. He's begging, pleading and imploring, but the tone in his voice knows that it's ultimately futile.

Speaking about the track, the band's Andy MacFarlane said:

"We recorded 'The Airport' during our sessions for Nobody Wants to Be Here and Nobody Wants to Leave with full intention of it being on the album. It always sounded like a continuation of 'Seven Years Of Letters' to me - in reference to our second album Forget The Night Ahead. Unfortunately, when we were deciding on the running order of the new album we couldn't find the right place for it to fit.So we're releasing it now. We wanted to highlight its release by putting it on a picture disc with new artwork by DLT."

Graham is also set to sell The Big Issue on the streets of Glasgow 4 February as part of #VendorWeek; find more information here.

NWTBHANWTL is out now via Fat Cat.

Listen to "The Airport" below.