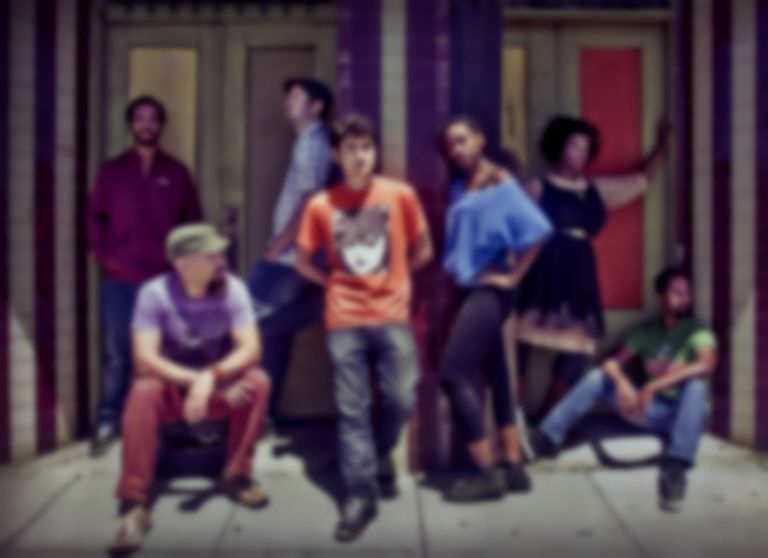 Everybody loves a good hook, right? Well, San Francisco seven-piece The Seshen know just how to craft one on their latest cut, "The Fall", premiering today on Best Fit.

The chorus in "The Fall" is painfully familiar from the get-go, swinging as it does between nursery rhyme melodies, but we are loathe to second-guess it when it's comprised from such eclectic fibres. Taking inspiration from psychedelia, hip-hop, pop, RnB, West African music, dub and indie rock, you can practically hear all of the band's inspirations fold into one another at the crux of this four-minute wonder. Syncopated beats, earworm melodies, electronic gloss and more all stick to a dubby bass backbone - reminiscent in parts of Little Dragon's radiant electro-pop though far more hypnotic and untamed.

Speaking about the song, vocalist Lalin St Juste said: "'The Fall' came through from the shadow-like presence of the past. You find yourself running, hiding, doing everything you can to not face the reality of the pain you've experienced and yet there's no other way to go but into it and through it."

With slots supporting the likes of fellow beat-heavy purveyors tUne-yArDs, it seems like The Sechen have come a fair way since their humble beginnings as a two piece in Ghana. Here's to hoping they've got nothing to be humble about in the future.

The Seshen also share the video for "Oblivion" on Best Fit. Lalin said: "'Oblivion' came from that heartbreaking moment when I realised there's nothing I can do to save someone I love from themselves and their self-destruction. And as I watched them slip away, a piece of me went along with them."

"The Fall" appears on the band's Unravel EP, released on 6 October (UK/ROW) and 7 October (US) via Tru Thoughts.

The Seshen unfortunately had their gear stolen recently. You can help them replace their kit by donating here.