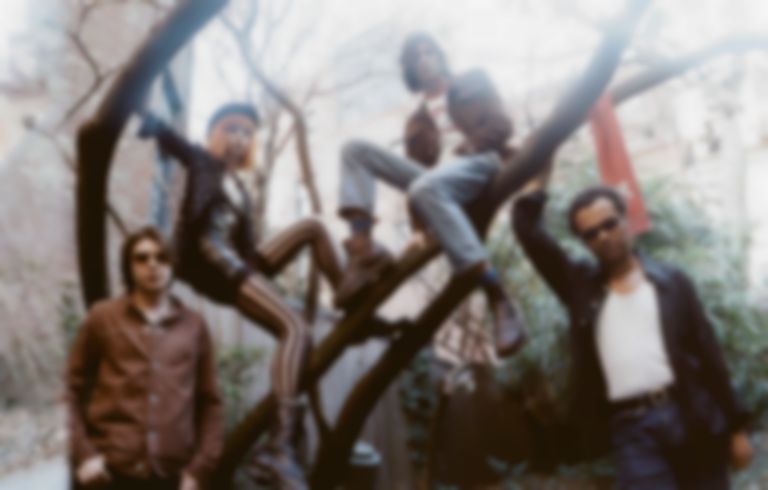 Photo by Zackery Michael
Song Of The Day

Taken from their upcoming record Everybody's Made Of Bones, new single “Walk Me Home” finds London-based producer pair Sunglasses For Jaws firmly in their era-transcending element.

Sunglasses For Jaws' latest is an invite into a storm of sonorous psych-rock bedlam, an earthy smog of treacle-filtered guitar twists and swivelling keys, engulfing in its vaulting consistency. It's an anti-gravitational direction the outfit have perfected since their inception four years ago.

Such reality-dissolving properties further coincides with a video populated by silver-suited spacemen and frog-masked humanoids - an offbeat reel of characters playing out in a playfully disorientating parade. With actor Olivier Huband on-board alongside mainstays David Bardon and Oscar Robertson for their latest album, the outfit additionally sought the talent of Charlotte Kemp Muhl, applying her production expertise at partner Sean Ono Lennon’s studio in upstate New York.

Building upon the subjects of judgement and free-will, the track lyrically tears between risk-aversion and the need for spontaneity, reflecting the ensuing domino-effect of each instinctual choice made, an existential weight nimbly tying in with its floating sonic space. "The concept behind the song is that of temptation. Of making a decision that could have disastrous consequences,” the band outline. “But, just as Eve plucked the Apple from the Tree, we want to take our own risks and taste our own apples. And those risks seem even more exciting when they’re forbidden. Who knows what could happen. What could change. How you could feel. You’ll never know unless you try it. So I’d just say this: don’t go home with strangers... unless you want to."

"Walk Me Home" is out now. New album Everybody's Made Of Bones is out 3 June via Pony Recordings. Find Sunglasses For Jaws on Instagram.