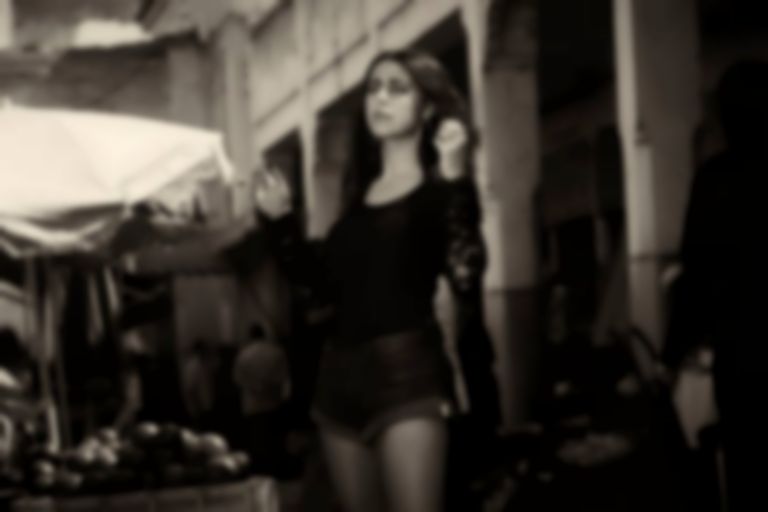 It’s mid-afternoon on a sun-spattered day in Brighton. Yards from the town’s venerable pier and nestling under Brighton’s version of the London Eye is a small stage. A gaggle of shoppers, teenagers and bemused pensioners are watching YADi belt out her whip-smart take on urban pop.

The London-based singer-songwriter (Hannah Yadi to her mates before her name was invaded by capital letters) unleashes a cascade of pop nuggets – early singles ‘Guillotine’ and ‘Sahara Heart’ both get a play – and the unthinkable begins to happen. Joe Public starts to dance. If an afternoon flash gig is the graveyard shift, YADi has just woken the dead.

Several hours later, Best Fit catches up with Hannah ahead of her ‘proper’ show that evening. We create our own living space in a filthy stairwell and the instantly likeable Hannah is quickly into her interview stride. We begin with familiar territory. Of Algerian, Italian and Norwegian descent, she’s well versed in answering questions about her background. In truth, she admits to being bored by the journalistic fascination with the subject, but YADi’s take on pop is so rich and stylistically diverse, it’s virtually impossible not to be intrigued by Hannah’s insight into her African roots.

YADi’s star has risen sharply over the last three years. After being ‘discovered’ by Tribes’ frontman Johnny Lloyd, YADi released a number of hugely impressive singles and also teamed up with collaborators such as über-producer Ariel Rechtshaid (who has worked with Haim and Usher) and Hot Chip’s Joe Goddard. Her debut album is complete bar “a couple of songs” and, if a beguiled Brighton public is anything to go by, YADi’s sharp pop could well win over a million hearts.

I believe your father is Algerian but fell in love with British music as a teenager. How has he influenced your taste in music?

My dad moved over here when he was 18 because he loved British rock music so much. He came over to watch The Rolling Stones in 1976 and never left. My dad used to sit me down every Saturday when I was a kid and take me through his record collection. So, I have definitely inherited that love of British music and I make British pop music but it has a little twist. People are fascinated by my heritage but it is not so important to me, although I am fascinated by the past and historical stories that are passed down through my family.

I like the idea of history being passed down via stories and songs. It feels like a rich and traditional way of keeping a culture alive.

Exactly. It’s not in Algerian culture to write things down, so I have to get these stories out of my family. I always joke that I want to go on the ‘Who Do You Think You Are?’ TV programme and my Dad always says ‘you wouldn’t find anything, the stories are all we have’. Whenever my grandparents are over from Algeria, I sit in the kitchen with my grandmother and we cook and she tells me about family, and history, and stories of the revolution – things that are going to get lost if we don’t speak about them.

I recently spoke to a musician who had worked with the Sami people in northern Sweden. She told me that they write songs about a specific thing – a river or a tree – and that the song is forever connected to that object. Is that concept prevalent in Algerian music?

Yes – in Africa, particularly in a place like Mali, a lot of songs are sung about family, respect for women, tales of older family members and about the origins of music itself. They often sing about the Nile and riverbeds and where music comes from – the heart of music. I think it is the nostalgia in those genres of music that I really relate to. I think if anything has come through in my music from listening to those songs, it is the storytelling aspect of it. I often sing about my family and things that have happened – either good or bad – and it is a way of keeping the stories alive.