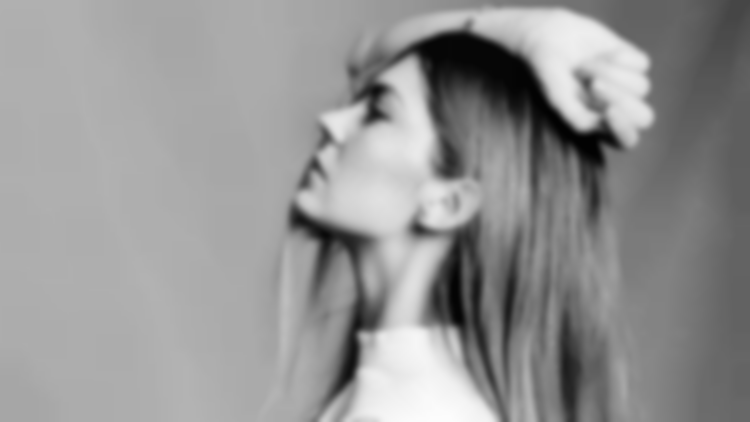 Rosie Lowe can talk. On record she casts a stark and spacious musical landscape that lets every sentence echo with sentiment over deep and polished beats, but in person, she’s not as reserved. Which is only a good thing when it comes to having a chat.

Within sixty seconds of commencing our interview in an East London coffee shop she’s on to the family history. “My dad buys me a book a week to read,” she enthuses, before admitting, “Well, over-exaggeration. I get like, four things of Berocca and a book once a month. I’m like, ‘Dad, I don’t have time to read, but I’ll have the Berocca every day.’ It’s so sweet. He started it at Uni and he’s never stopped.”

Rosie grew up in Devon in a house built by her dad out of wood, in the middle of a valley, and studied Popular Music at Goldsmiths in London – where she’s now based. Having signed to Domino for publishing, they introduced her to esteemed producers Dave Okumu of The Invisible and Kwes. Her debut EP Right Thing is released next month on 37 Adventures.

I ask if she was an Invisible fan before and she smiles, “I was a huge fan, I thought they were fantastic. And then he brought Kwes in who I was a huge fan of before and I was really lucky. It’s really hard to find one person that understands your music in that capacity and can put it across and listen to you as well and realize that, but finding two people…”

Dave Okumu is well known as a songwriter and producer on Jessie Ware’s debut, an artist Rosie is often compared to. “Yeah, it’s coz of the Dave connection and then being a young woman in music, there’s going to be connections, but I don’t mind. I think she’s fantastic and I think it’s important as young women in music to support each other and have that respect for each other and help push each other, because there needs to be more women in music.”

Conversation turns to ‘Miley-gate’, an issue that’s already been so well covered on the Internet we don’t need to delve here, however Rosie is, “Relieved that the issue had come up, in a way that people were actually talking about it.” She goes on to relate it to her band.

“I’ve got an all-female band and the first comment you get when you come off stage a lot of the time is, ‘You look amazing.’ It’s like, last week we did a gig and it was awful one of the comments was, ‘Man, your drummer was wicked, and you are beautiful.’ But I think we’re progressing really well. The amount of amazing female artists coming up is really positive and I hope it continues.”

With this is mind I ask how Rosie feels about fashion shoots for musicians and if she would consider posing in magazines that aren’t necessarily focusing on her songs. “I really believe in ethical fashion, I’m big on that. But it’s really hard in this day and age where everything is so connected. So it depends. I’ll never agree with being pushed in particular ways. I know how I want to be perceived visually as well as musically.”

“It used to be that you’d just be a musician and you’d be writing and you’d be in the studio and you’d be performing, but now you’ve also got to be beautiful and good in front of the camera, and really good on social networking. All of it, you know? There are so many aspects now and sometimes I feel like the music loses out because there’s not enough time for it. That’s how we live in this day and age. All of it’s fun and you learn something, but at some point something’s got to budge.”

At the moment Rosie is in the studio with Dave and Kwes working on her debut album. I ask how the songwriting process works. Is it collaborative? “I always write music and produce it as far as I can take it and then I take it to the boys and we work on it collaboratively from there,” she explains. “I think it’s amazing that you have the tool to put it down in the way that you hear it because otherwise that moment’s lost. You kind of capture that moment and what you’re thinking, the energy of the track. And then Dave and Kwes are great because they always get it, and then they’re interested in bringing out the story.”

How important is the story? Are the lyrics? Rosie smiles, “It’s funny because at University we had this one lecturer and they played us three songs; a Bob Dylan song, a Joni Mitchell song, and I can’t remember the third. And then asked, can anyone tell me what any of the three songs were about? Me and two others put our hands up and we relayed lyrics and then we had this discussion and pretty much ninety percent of the class said, ‘I don’t listen to lyrics, I never have done. I wouldn’t be able to tell you what my favourite songs were about. I listen to melody and I listen to the chord changes.’ I was just like, blleewwwwgghh. Lyrics are so important to me. I spend so much time with lyrics sometimes. You put so much emotion, they’re so emotionally heated, and YOU’RE NOT EVEN LISTENING TO LYRICS?!”

Well, we’d better start listening, because Rosie Lowe has a lot to say, albeit in a very considered way.

Her debut EP Right Thing is released next month (2 December) on 37 Adventures.