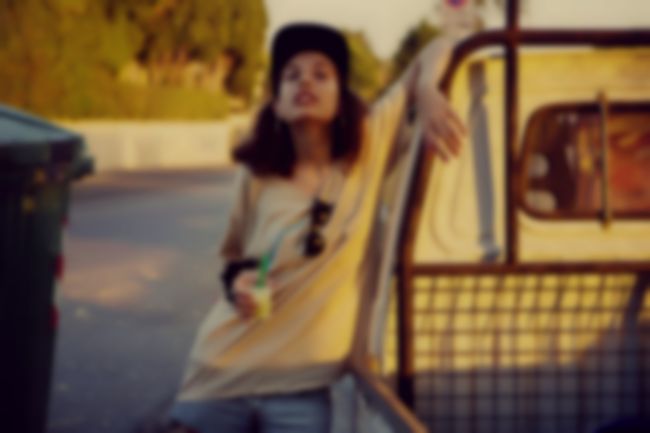 Sitting outside of The Green Door Store in Brighton, D E N A has just arrived in the seaside town ahead of her performance at the Great Escape Festival.

Looking around as she sips on a coffee, the Berlin based musician and vocalist – real name Denitza Todorova – is relaxed as she chats about the evening’s festivities, as well as a forthcoming performance at Glastonbury and the release of her brand new single ‘Thin Rope’ via London imprint POP unLTD. It’s a busy time for the Bulgarian, but she’s more than ready for it.

D E N A cut her teeth in music working and touring alongside the likes of The Whitest Boy Alive, Icona Pop and LCMDF before releasing her acclaimed single ‘Cash, Diamond Rings, Swimming Pools’ through cult Parisian label Kitsuné earlier this year. Since then, she’s played at SXSW and in Brazil, so we catch up with the beats influenced vocalist during a quiet moment ahead of her Great Escape performance to find out who she is, and what makes her tick.

So how are you feeling about performing at The Great Escape?

I know it’s one of those ‘industry showcases’ and everything, but I feel like there have been a couple of people that are interested – like The Great Escape themselves and Amazing Radio – so it feels a bit more personal. I’ve never been here before, but something’s telling me it has a bit of a family vibe. Let’s see!

How did you start out making music – what are your earliest memories?

My parents never forced me to play music, thank God – it’s a good thing to find it naturally. When I was little, I used to have this portable cassette player and I was totally obsessed with it. And my parents – we didn’t really have a video camera or anything back then – so my parents used to record me and my little sister the whole time. I think it was their way to capture memories. They had cameras and stuff, but they have these tapes of us crying and stuff, they had this audio thing going on, so it was super natural for me to hold down a button and record me talking into the machine. Then I had these first songs when I was about 10, writing super-weird Bulgarian rap – kid’s rap with my sister, assigning her to sing backing vocals!

Can you remember what any of the songs were about?

I wrote this complaint about the milkman who was actually a milk woman selling milk on the street at 7am, waking me up super early. So it was basically a complait, like ‘i’m sleeping, why are you waking me up?’ But always leaving gaps for backing vocals for my sister! Then I joined the school choir and stuff, then after school I moved to Germany, to Berlin. Suddenly, I had to figure myself out with the languages, figure out how I was going to write – how was I going to write so that people would understand, and what am I going to say?

Parallel to that, I started a band with a friend of mine from Canada right when I moved to Berlin. It was my first band actually, where I played synth and she played drums, a do-it-yourself girl duo thing. Then we split and I got a beat machine, and at some point I figured out that I had to concentrate on my own thing, writing arranging and composing. Then I met all these Finns from Kaiku Studios – we met at the perfect moment, when I realised that I was very interested in writing poppy formulated, synthesised small truths. And I wanted to have beats going on, so we joined forces and fast forward, here we are.

If it was the annoyance of milk women waking you up that inspired you to write as a child, where do you draw influence from as an adult?

Everything’s very inspired by a certain reality of things, and I guess i’m just filtering it and trying to find inspiration to write words for these little glimpses on a daily basis. I’m still not there when it comes to writing with metaphors and things. I’m very interested in words and how to work with them but right now, i’m in a realistic phase!

Your single ‘Cash, Diamond Rings, Swimming Pools’ got a release via Kitsuné earlier this year – how much have things changed for you since then?

Yeah, that was definitely great to release it – to have a digital release and also to press it on vinyl. We’d been playing like crazy, playing showcases – it was pretty great because we’ve chacked out some venues in pretty interesting places in Europe. We also went to SXSW in March, so that was great.

The show right now is me and a girl called Anna from Denmark, she sings backing vocals and triggers some beats, and I play keyboard. So they’ve very compact club shows with the two of us singing live.

How crazy do your live shows get?

Playing live shows is such a weird thing, because you never know how it’s going to go. Sometimes the sparkle is there and there’s chemistry between everyone, the moment is there. But I never know, there’s no certain rule of how to make something happen. In different regions, you have different crowds and people who have different ways of showing their participation.