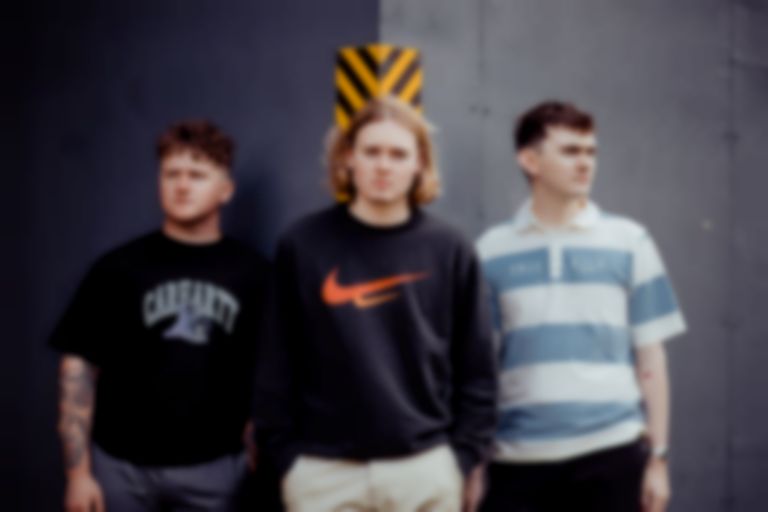 Breaking the ground of their signing to Nice Swan Records, The Rills make a biting statement with "Skint Eastwood".

Based out of Lincoln but with a plethora of influences that stretch across the UK – from Sheffield’s Arctic Monkeys to London’s The Libertines – The Rills aren’t short of storytelling footsteps to follow. Originally made up of vocalist Mitch Spencer and bassist Callum Warner-Webb, the trio, as they are known today, honed themselves upon a trip to London, where they met drummer Mason Cassar.

“Trying to do music or anything out of the ordinary is extremely difficult in a place like Lincoln because there’s no infrastructure or industry there,” explains Spencer. “There were never any gigs, and the ones that were there were massive, so you go from pub gigs with cover bands to seeing the Kaiser Chiefs. There were no young bands, so we knew if we were gonna build anything, we had to leave.”

They describe the forming of the band as "suddenly going from this blasting wall of sound to there being three instruments, with clear dynamics, where it felt concise. The whole ethos of the band had changed."

As their first single to be released through Nice Swan Records (once home to the likes of Sports Team, FEET, English Teacher, amongst other leftfield indie heroes), it’s natural that the track bursts out of the gates sounding something like a milestone for the trio.

Instantly punchy and intensely focused, The Rills kick things off with a fierce vocal accompanied only by a drum line that jolts the track awake with no apology. It’s not long till the riffs arrive, an apt homage to the golden age of guitar indie.

The scuzzy, anthemic instrumental of the chorus is a familiar blueprint, but Spencer injects the melody lines with a dose of cinematic darkness. The song’s penchant for drama is even more expansive as we draw to the end of “Skint Eastwood”, as noisy chords eschew in favour of a seamlessly hazy and disconcertingly gentle bridge that’s as atmospheric as it is unnerving after the fast pace of the first half.

Character-driven writing saturates both the lyrics and the music – The Rills’ anti-hero gives the song its insistent pulse, the imagined life at its core. “Skint Eastwood is a Lincoln loner,” explains Spencer. “He’s a BMX bandit who lurks the streets for affection, be it by begging, stealing or borrowing.”

“Suburban life gives way to people like Skint Eastwood, kids with nothing but the change in their pockets and the rucksack on their backs - cycling into oblivion as much as they are crying out for help. There’s something familiar about that old cowboy cliche; a hard exterior crossed with a soft and vulnerable interior is easily used to describe the lost boys and girls of our generation.”

“Skint Eastwood” is out now via Nice Swan Records. Find The Rills on Instagram and catch them live at Colours on 15 December.