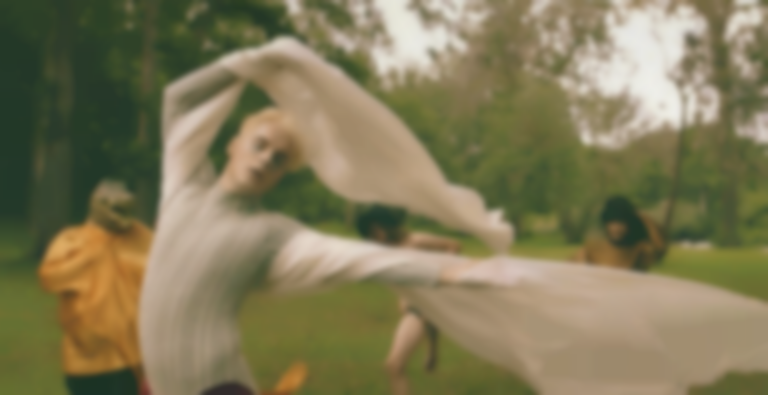 With their new album set to drop later this week, Suno Deko has unveiled a new track with some beautiful accompanying visuals.

With a Shakesperian video clip (directed by Ian Clontz) featuring members of Hundred Waters taking part in a ritual featuring death and rebirth (a nod to Courtright's acceptance of a queer identity), "Altar" as an audio and visual whole is perhaps Suno Deko's best work to date. Gently chiming guitars mix with warm ambient electronics and a slowly-rising swell of strings. Over all that soars the voice of Suno Deko, almost wordless and echoing as if from a lost choir, floating up and away from an ornate transept. It's a stunning piece of work.

"Since last November, and perhaps before, I think a lot of us have felt an almost unendurable cataclysm of heartbreaks, over and over, one after the other," says Courtright. "How many times have you died since then? For me I died a thousand deaths over the course of making this record, some personal, some political. Reading the news is a death. Moving from Atlanta to New York, my seven year partnership ending—other deaths. But in life, death must occur to make way for new life. Thich Nhat Hanh writes so much about how the beauty of the garden would be impossible without the dirt and compost of old food and plants, how the lotus flower wouldn't exist without the mud on the bottom of the pond. So I wanted to honour my own deaths and die and be reborn, to shed that skin and step vibrantly into a new body, or a new way of living, holding and honouring my scars but standing upright in the face of a world and a country that would probably rather erase me and those like me.

Having my father be the swamp priest that sets me aloft on the river into the afterlife felt full circle, as I am the extension of him into the future and he and my mother and his father and mother and those that came before are the extension of me into the past. And to have this document where we were together to hold when I am his age and can look back and feel such joy for our love and deep friendship. On a whim, Hundred Waters stopped by the set between a show in Tallahassee and Gainesville, dashed into makeup and costume, and motherfucking frolicked with me beside a blazing bonfire. So this film is both a celebration of life and an acknowledgment of the purpose and necessity of death, of walking through fire to the other side, and of the radical act of creativity and love and friendship in an era of the greatest destruction our cultures and societies have known."

"Altar" is taken from Suno Deko, out 13 October via Elestial Sound.