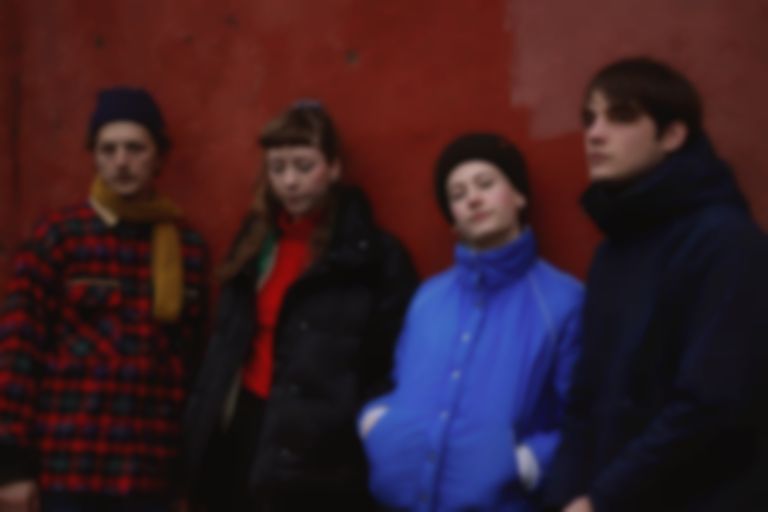 Gothenburg four-piece Holy Now have cut their scrappy, lovelorn indie way across two EPs to date. Their new single "Feel It All", however, moves them onto a whole new level.

"Feel It All" sees Julia Olander, Ylva Holmdahl (also in Wildhart), Samuel von Bahr Jemth, and Hampus Eiderström Swahn at the smoothest and most polished they've ever sounded. The guitars shimmer and shine, and there's a subtle, understated euphoria in the almost-wordless chorus.

There's a sense of opening up to new things in the song, and it feels like a new frontier for the band's songwriting. Holy Now's debut album is on the way later this spring, and "Feel It All" is an exciting first shot. Listen to it below, and hear what the band has to say about it after.

BESTFIT: Hey Holy Now, tell us about how you wrote "Feel It All"?
Julia Olander: "I had the melody in my head for a while and didn't know how to make it into a whole song. I was having an quarter-life crisis (which I'm still having) and wanted to write a song about the feeling of how time flies. We tried it out together and it became a smashing pop song!"

The single seems to have a bigger, more direct, and more polished sound than the tracks on the EPs. Does that represent the new album?
Julia: "We have worked together with a kick-ass producer, Henrik Alsér, and maybe that's why it sounds a bit different. Even though it might sound more polished, we would like to add that we recorded the album in Hampus' parents' garage, so we are not too high-class yet."

The new album is out in a few months, what can you tell us about it?
Julia: "It's eight songs, two are ballads and the rest is more danceable. There are still quite happy melodies combined with sad lyrics, like before. If you have heard our earlier music you will recognise the sound, but hopefully think it's Holy Now 2.0!"

"Feel It All" is out 10 January on Lazy Octopus and OK Tapes (USA).