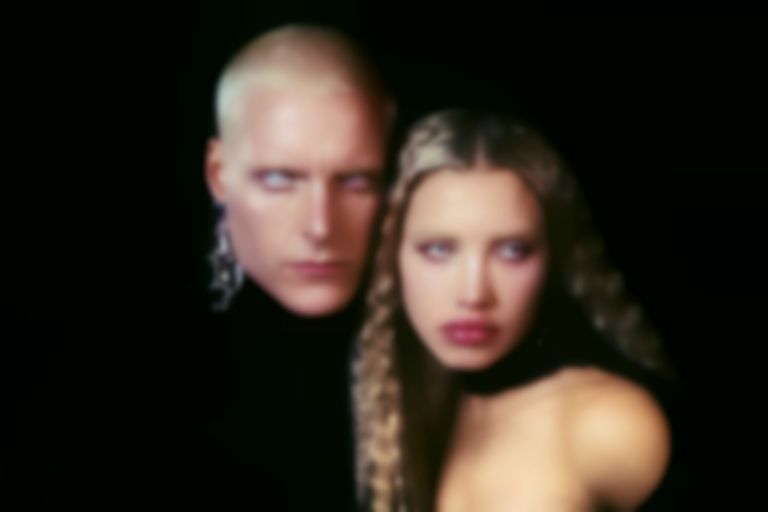 Alto Arc combines the creative talents of makeup artist/creative director Isamaya Ffrench, Deafheaven vocalist George Clarke, prog-pop production and composition wizard Danny L. Harle, and Hundred Waters mastermind Trayer Tryon. And, despite the four of them having “never all been in the same room”, the transatlantic ensemble are already proving themselves to be a formidable collection of minds.

“Danny and Trayer will work together remotely and Isamaya and Danny track together in London,” Clarke explains. “When Trayer and I track in LA, we have lyrics and a basic vocal outline then experiment. Trayer can quickly discern what he likes about a sound or emotion and build on it. He's great at directing in the studio."

“Bordello” serves as the second taste of what the supergroup has to offer, and it entirely contrasts with the ethereal glitch-pop-meets-darkwave flare of their debut single “Nocebo”. “Being that there's not a stamp on what our sound is, releasing a song like 'Bordello' after 'Nocebo' is a way to show how wide the parameters can be.”

Alto Arc is an eclectic puzzle of texture, distortion and theatre - but one with a remarkable harmony between light and dark tones. “Trayer and Danny have a real skill for balancing harsh textures to better elevate the cinematic sounds," says Clarke. "Isamaya's voice also does heavy lifting for the melodic side. I think from the beginning everyone wanted both.”

The track's visuals see Isamaya Ffrench take on the role of an enchantress: a siren luxuriously luring in her prey before cutting to a darkly pulsing, distorted metal breakdown. Intoxicatingly sharp, the clashing textures on “Bordello” both mesmerise and horrify. The track feigns innocence before sinking its talons in and twisting deep.

“'Bordello' has a propulsive, creeping sound [that] I felt needed a more slithering voice. I was reading a lot about Julian of Norwich and anchorites which became a lyrical inspiration, then Isamaya's vocals and lyrics cemented it. The strange, overarching quasi-religious theme of the project feels most evident in this song.”

Elizaveta Porodina brings the track to life, crafting a disorientating enchantress nightmare. The visuals truly enrich the track’s cinematic tension, bringing its horrors to life: an intentional aspect of Alto Arc's genetics. “The entire project is theater. The narratives, archetypes, melodrama," Clarke comments. "The cinematic drive is intentional. Occasionally Isamaya and I write full visual concepts before songs are finished."

"Bordello" is out now and the self-titled EP will release on 11 February via Sargent House. Find Alto Arc on Instagram.