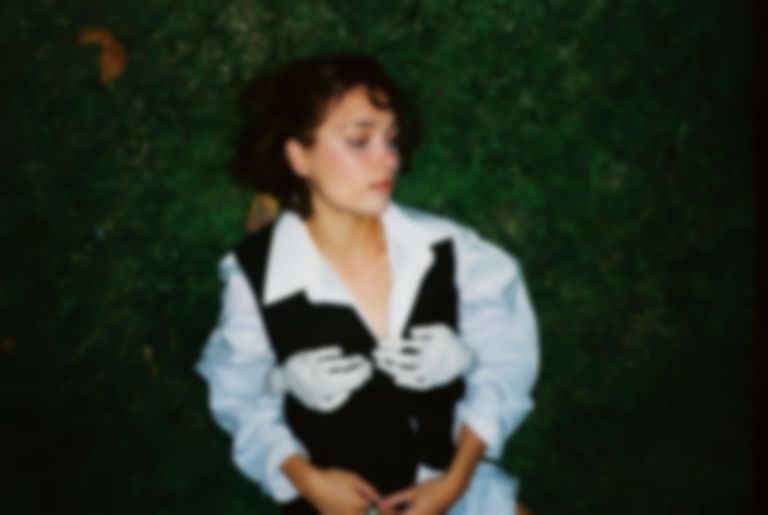 Singing about young people who aren’t prepared for a dive into the deep end, Abby Sage shares a fresh outlook.

L.A./London-based Abby Sage is a consummate pop artist who feels it’s important to “make 'em wait for something great.” There’s always a surprise somewhere in her songs, and it comes at the very end of the video for her new single "Pool Party" - that's when you finally catch a glimpse of her face that’s been hidden behind spooky masks for three minutes.

“The song is a metaphor for kids not being prepared for the world,” says Sage. ‘Pool party kids can’t swim / they ask nobody just sink to the bottom and think (off the deep end).’ Kids are dealt a tough hand, having such a vast amount of information at their fingertips with nobody to guide them or explain what it all means. They have to drown to learn.”

The Aidan Dick-directed video for "Pool Party" feels like an art-school version of the ’90s horror classic Scream (although the masks here conceal existential confusion, not murderous intent). “The video concept came to be when I brought Aidan the idea of using a black void space so it would be easy to duplicate, move around, and edit all on a fully black background,” Sage shares.

“It’s an intense song so I wanted a visual that matched that. I made the masks out of paper mache with a friend and hung them with fishing wire. I really wanted it to look like they were floating in mid-air and make it a little spooky. The video is just a chaotic fever dream of a bunch of different masked characters playing cards and getting more and more unhinged as the song goes on. The space gave us free rein to make something visually interesting and I’m super happy with how it came together.”

Sage’s previous single “Force of Habit” starts as delectable dream-pop, but gets even dreamier as the song progresses. By the end, you feel like you’re gently floating down a stream watching an occasional lily or lotus drift by. In 2021, her single “Smoke Break” began like a gossamer ballad, but shifts midway into Pink Floyd/Yes territory in a totally unexpected way.

Sage grew up in Toronto, but she’s half British and now splits her time between London and L.A. Perhaps that’s why you can hear musical influences ranging from Canada’s Tate McRae to Phoebe Bridgers and Roger Waters.

Nothing can mask the virtuosity of Sage’s work so far, and "Pool Party" invites a deeper dive into her music.

"Pool Party" is out now. Find Abby Sage on Instagram.