Sometimes it’s hard to hide your love of something or someone. You know those times when you become aware mid-conversation that you keep mentioning a certain friend, girl or band. And so you have to stop yourself, while your sentence trails off to nothing… Well, San Fran duo Girls are kind of like that. They’re the friend-crush you sometimes get when you meet a new person and are so enthralled by them with a mix of male envy and happiness that you’ve found a physical manifestation of your own reflection that the sensation tiptoes dangerously around being homoerotic.

With this in mind, we’re going to throw caution to the wind and talk a whole lot more about the band, whose second full-length album Father, Son, Holy Ghost has just been made available for streaming, embedded above.

The duo – comprising of Christopher Owens and Chet ‘JR’ White – have never been adverse to opening up a little. Their debut single, the upbeat pop hit ‘Lust For Life’ sardonically longed with morbid black humour for a man in their lives in the wake of Owens’ ex-girlfriend’s new relationship. But already being flourished with rave reviews by everyone from Pitchfork to The Guardian, this record is their ultimate break-up album, their Rumours, their Yankee Hotel Foxtrot, or their ‘every Bright Eyes release’ – brilliantly documenting the highs of infatuation and the rock-bottom lows of loneliness.

Here’s a track-by-track rundown of the album’s turbulent ups and the downs:

It always seemed a bit far-fetched when Girls were repeatedly compared to Elvis Costello, Buddy Holly, and The Beach Boys, didn’t it? Well, not so much anymore. This opening track kickstarts the album with pockets full of blue jean swagger and deserves to be played on the car radio of a ’58 Cadillac (a car that may or may not actually exist). But don’t think they’ve gotten all High School quarter-back on us quite yet. Nope, despite the cocky strut of the music the band remain hopeless outsiders. Some records are records to have sex to, like, I don’t know, Marvin Gaye? You can clearly tell that my experience in this subject is rather limited, can’t you? But it’s pretty damn clear from this very starting track that this album is not one of those to have sex to. You don’t want such select lyrics like “Mama, she really loved me / Even when I was bad / She’d hold my little hand / And kissed me on the cheek” serenading your conquest. They really don’t need another moaning girl in the room. If anything, it is rather an album to not be having sex to; a manic proclamation of love, a lament of loss and crying over grazed knees and the like.

After the ’50s-infused opener we’re back to a more familiar Girls as Owens’ vocals are lost in a sea of distortion. It’s a song of teen-like obsession and infatuation. Owens sure does have a knack of name-dropping these mystery muse-like figures in his songs, like ‘Laura’ from the first record and ‘Jamie Marie’ later to come on here. It’s kind of like when people don’t @tag friends in their tweets. ‘Alex’ sounds like it could soundtrack that scene in Donnie Darko when Donnie and Gretchen are walking down the stairs into the party after they’ve done the deed. Yeah, you know the part, right before Gretchen goes and dies… Happy mating, kids!

Lyrical highlight: ”If somebody somewhere cries / Well who cares? / No you don’t”.

Errr, okay, this is still Girls right? We’re not being tricked here, are we? We haven’t been given a decoy press copy as punishment to the album leaking a few weeks back, have we? The track throws us in the deep-end from the beginning, drowning us in shreads of heavy metal guitar more suited to what Owen-lookalike Wayne’s World’s Garth would listen to rather than that which Girls’ more natural fanbase would. It sounds like someone’s using Kerry King’s bald head to play milk bottles, all lined up in a row. You kind of expect Tom Araya to yell “raining blooooood!” at any moment. Right, it’s a good thing we’re not having sex really or that would just ruin the mood completely. And then the words come in after around a min and a half of not-quite-headbanging-but-nevertheless-headmoving glory: “No, nothing’s gonna be alright / No, we’re all gonna get fucked up tonight”. Okay, yep, it’s still Girls alright.

‘Saying I Love You’

Now how do you follow that guitar solo? With the post-coital comedown of ‘Saying I Love You’ that’s how. The song seems like a generic radio-friendly sickly number until the crux of the chorus hits you like a fairground hammer to the chest.

One thing you should know about Girls’ lead singer Christopher Owens is that he was raised amongst the new age cult ‘Children of God’. That said, this song isn’t just a 20-something guy crying into his beer about missing his mama. No, it’s more than that – a metaphoric manifestation of his divided history and self, between his isolated childhood where everything seemed so simple and the life he has fallen into now; drug-addled and confused wandering around the modern world, from city to city, country to country, singing in front of rooms full of total strangers who actually encourage his digression into insanity and despair.

Lyrical highlight: “I’m here in darkness / And I want to see the light of love”. 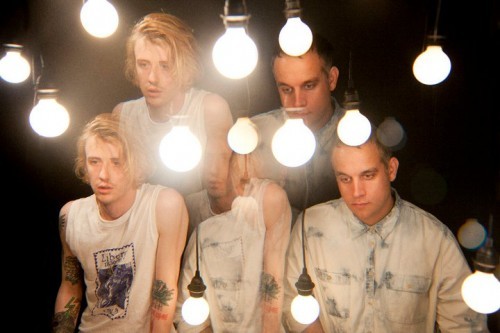 This one, pre-album single ‘Vomit’ , feels a lot like a daydream when you don’t know the boundaries of what is real and what isn’t. It’s an epic 6:36, culminating in a euphoric burst of female gospel-choir vocals sounding as if he’s fallen asleep listening to Nina Simone. In the accompanying video, Owens drives around LA like a fringed Travis Bickle out of ‘Taxi Driver’ – just, you know, looking for love, not teenage prostitutes.

From its childlike guitar strumming intro, the song bursts into an emotional languish as Owens laments the emotional decline of not only himself but all those around him. You remember all those pretty, perfect Californian hipsters that flooded the videos from Album with their shoplifting and their nocturnal sleeping habits, well it turns out they get sad just like the rest of us normal folk. The lines “Feels like it’s gone / Yeah, it’s gone, gone away / Seems like nobody’s happy now/ Feels like nobody’s happy now” has enough power and intensity to silence an entire room. Seriously, do not run the risk of allowing this track to creep up on shuffle at a party, you will not be able to have fun afterwards. And you will be drenched by your own and others’ damp tears.

“Just a look was all it took / Suddenly I’m on the hook”. That’s all it takes really and we’re done for, hook, line and sinker. This is Girls’ reflective take on the truly pathetic nature of our male neediness. Like when a girl asks what the book is that you’re reading in a coffee shop. Or when an attractive woman sits by you on the train even though there’s a good two or three seats free down the other end of the carriage. Or even when the lady behind the till in Sainsbury’s asks if you need cashback. I try to reply “Yes, twenty pounds please” in the most seductive way possible and then they ask if I want the receipt in the bag – a clear double entendre if I ever did hear one.

Lyrical highlight: “I must confess / If I manage to forget / Everything from as of yet / Then what a success”. 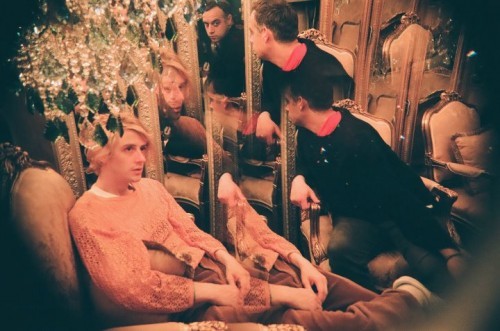 Sometimes when you’re so immersed in your own problems, you find it difficult to measure quite how long you’ve been talking about yourself. Owens definitely suffers from this on the record, with three songs topping the 6 minute mark. This one is two seconds short of a whopping 7 minutes. ‘Forgiveness’ comes across like a confused mind quite literally stuck on an endless loop, with neither Owens or the listener being able to or wanting to break free.

Lyrical highlight: “And I can hear so much music / And I can feel everything now / And I can see so much clearer / When I just, close my eyes”.

Okay, so these last few lyrical highlights have been hard to pick out. All early reviews are championing Owen’s great penmanship but I’m not entirely convinced by this. As much as I love the band, jeez – just look at all the gushing above and below, the power doesn’t lie in the words on the page as so much as the feelings conjured by the way and how they are sung. “My love is like a river / She just keeps on rolling along” is hardly a line that neither you and I could have ever written, I mean, come on, it sounds more Cat Stevens than Cat Power. But Owens’ pop sensibilities and his inclination to the kitsch render him as more comparable to Stephin Merritt. Yep, unashamed, inhabited and unapologetic outpourings haven’t sounded this good since… Nearly tricked you, they’ve never sounded this good.

‘Jamie Marie’, perhaps some relation to the ‘Lauren Marie’ of Album, sends us off with a little bit of a lullaby. Owens bemoans “I guess I didn’t realise they way I loved the way you moved /Until I moved so far away, I could see you anymore” , ultimately proving the the album to be not so much of a catharsis after all. From start to finish Father, Son, Holy Ghost is Owens rattling his brain, with all the songs falling out but evidently there seems a lot of hurt still remains at the close. Not that we’re complaining, anyway, in fact one day I wish I could make a break-up record somewhere as beautiful as this. It’ll be the aim of the next relationship I commit to. And with Los Campesinos!’ new record, the upbeat-sounding Hello Sadness, also coming out soon, what exactly are the guys at Turnstile Music trying to do to us? Man, I’m gonna have to fall in love and get my heart broken all over again just to be ready for Round 2.

Lyrical highlight: “And I know you are gonna be just fine / You know they say it’s better to have loved and to lose it / Than to never ever know it / Easy come and easy go – whatever!”. 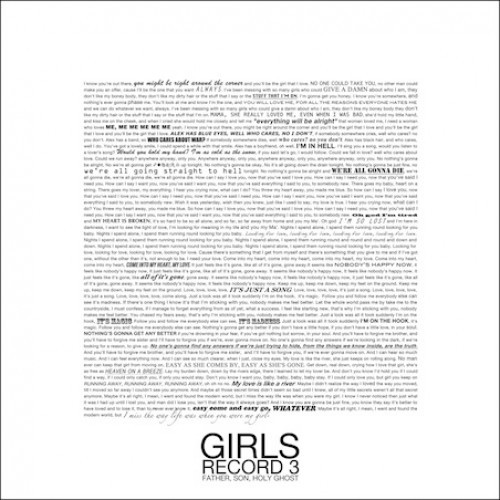 Father, Son, Holy Ghost is out now on Turnstile. Our review of which will be up later in the week.